Yesterday saw the launch of a gin Lazerus – a juniper spirit brought back from the dead: Tanqueray Malacca. I have reviewed and written about the original Tanqueray Malacca here. This original gin, designed to be slightly wetter in style, was released in 1997 and discontinued in 2000.

There are a few different suggested reasons for why Malacca was discontinued; one that is often touted is that it meant something rude in Greek*. As with most business decisions, I think that it was about the economics: demand was not high enough and production facilities at Tanqueray’s distillery are limited. In particular, with Tanqueray No:10 about to be launched in 2000, all of their capacity was needed.

I have theorised previously that if Tanqueray Malacca had been released in the second half of the last decade, it would have been a roaring success, as the more contemporary style of gin was, by then, in vogue – it was a product before its time. The spirit’s revival in 2013 will tell me if I was right or not.

Tanqueray Malacca is a limited run of 100,000 bottles; 80,000 of which are for the USA and 20,000 for the rest of the world. It is aimed exclusively at the on-trade market and is available only in litre bottles.

Tanqueray Malacca was famous (perhaps notorious) for the prices that were being paid for unopened bottles years after it had been discontinued ($150+ for a full 750ml bottle) and the quantities of the gin that were hoarded by speculators. The view of the Master Distiller of Tanqueray Gin, Tom Nichol, is that the gin is for drinking and he hopes that most of the 100,000 bottles will be enjoyed rather than displayed – true sentiment indeed.

But Why Bring It Back Now?

I put the question to Master Distiller Tom, who told me of the pleading and many requests that he’d received from bartenders to bring Malacca back and, eventually, Diageo felt they had to; this was a way for them to give something back to bartenders.

Tom also hopes that the attention Malacca will bring to Tanqueray will help people rediscover and remember what excellent products the original Tanqueray and No:10 are.

The finer technical details are a little mysterious, but we do know that it uses the same recipe as the original Malacca and so, for most practical purposes, it is the same spirit. The botanical mix is made up of a simple set of additions to the classic four-botanical selection of the original Tanqueray gin.

These extra botanicals are inspired by Charles Tanqueray’s trip through the Malacca straits to the Dutch spice islands. It also worth noting that Tanqueray Malacca is not a London Dry Gin; to find out what that means [click here.]

On its own
Nose: Juniper to start, then some citrus notes such as grapefruit and creamy lemon and lime. It reminds Mrs. B of Key Lime Pie with juniper berries (an intriguing combination).

Taste: What I think is most notable about Tanqueray Malacca is its texture, which is richer and fuller than original Tanqueray. It is silky and clean on the finish. After the initial juniper and coriander, notes of vanilla with sweetness and some liquorice appear, followed by citrus and hints of spice such as cinnamon and nutmeg. The dry start gives way to a more liqueur-like sweetness, although I don’t think that the gin is too sugary.

I think this gin is very easy to sip and enjoy doing so. When comparing it to my notes and memory of tasting the previous batch, I would say that it’s pretty spot-on, only more vibrant and intense.

To quote one taster, “That’s a lovely little delicate treat, that is.”. 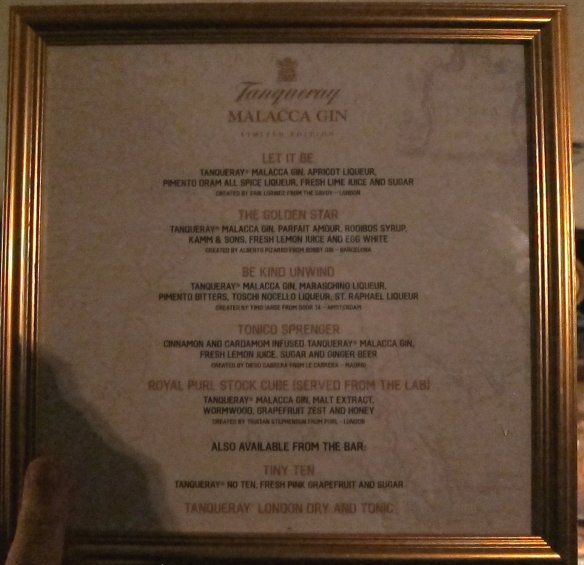 In addition to being able to sip the gin neat, Tanqueray had arranged for some top bartenders around the world to come up with some cocktails for the gin’s launch.

1) Let It Be
Created by Erik Lorincz, The American Bar at The Savoy.

My first drink of the evening, this was a fresh and fruity start. The Pimento Dram brings out the spiciness of the gin. The rather sweet, spicy elements are balanced by the citrus lime, with the balance of the cocktail really going through a transition as you drink. Finally, a little, jammy sweetness from the Apricot Liqueur comes through at the end.

This reminded me of a Gin Daisy; it was luscious and creamy, and slightly dessert-like. The spice and vanilla notes of the gin worked well alongside the fruity flavours, as well as the coriander from the Parfait Amour. Although it contained none, I also got some hints of pineapple at the end. 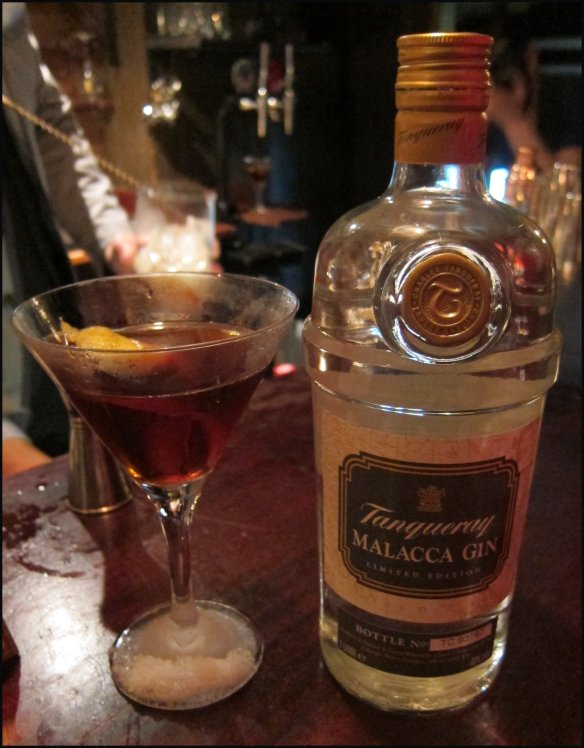 Be Kind and Unwind

A rather intense drink and, from my straw poll, a clear favourite of the evening. Deep, herbal notes complement the sweet spiciness of the gin and there was also some malty biscuit-iness on the finish. I thought this was a drink to contemplate things over, which was right up my street.

A fun, spritzy drink served in some rather fine glassware. This was Mrs. B’s favourite, with some crisp, spicy notes and a citrus freshness; great for a summer’s day. Although I really like the drink, I felt that it was perhaps not the best way to appreciate the gin.

“It’s a cup of Purl, but all of the ingredients are compressed into a gelatine stock cube. The cube is comprised of 35ml of Tanqueray Malacca, malt extract, wormwood, grapefruit zest and honey. Hot water is poured over the dried ingredients and the cube melts, flavouring the drink (like a stock cube). This is served in a tea cup with a slice of dehydrated orange, cinnamon flakes, tarragon leaf and a white sugar cube.”

Alas! I never got a chance to try this one.

In Conclusion
I really enjoyed being part of the Tanqueray Malacca launch and the return of this gin is a very welcome one. I think that it has a good versatility and look forward to seeing more innovation from bartenders using the spirit.

At the moment, I think my favourite way to drink Malacca is simply by itself – a departure from my previous thoughts on the gin, but perhaps a reflection on how a gin that’s been left in a bottle for many years can lose a little of its life and vibrancy.

With only 100,000 bottles available, it won’t be long, I fear, before Tanqueray Malacca once again disappears, so I’d recommend trying it while you can.

Tanqueray Malacca is available for around £47 for One Litre from The Whisky Exchange.

* Although, with no disrespect intended at all, I’m not sure how much influence the Greek gin drinkers in the USA have.