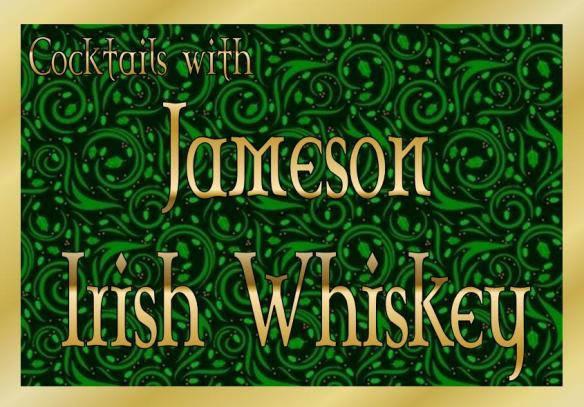 Today’s peak into the whisk(e)y world is inspired by Mr. Hartley’s recent look at Jameson Irish Whiskey. This is likely to be a more familiar name to many than some of the liqueurs that I’ve reviewed over the past year, but my focus today is its use in cocktails, rather than on its own. As the festive season draws ever near, we’re starting to experiment a little more with seasonal flavours and it was whilst doing this that we thought that Jameson would be a good spirit with which to base our trials.An Irish single malt established in 1780 Jameson is triple distilled and they use unsmoked grain. For Christmas Jameson’s have released a rather festive gift pack as pictured below.
.

On its own, the Jameson had a light, bright nose of caramel and light wood that had a creamy aspect to it. It had a good, no-nonsense flavour that starts out very smooth, before expanding quickly into a stronger, fiercer flavour of wood, with significant warmth at the back of the mouth. This warmth sensation continued down into my stomach, making me think it an excellent winter tipple. Despite this long main-body of flavour, the finish is short and clean, being slightly dry.

This cocktail had a slightly sweet nose, mainly of syrup and caramel. It was exceptionally smooth on the front of the tongue, before giving a kick of flavour at the back of the mouth. The predominant flavours were of oak, cinnamon and a hint of caramel, all combined with an almost buttery texture. It was mostly dry, even slightly bitter at points, especially on the finish, but a pleasant sweetness remained on my lips.

A very interesting nose indeed: half of Christmas spice and brandy, and half of cola.
The main flavour was of the Pedro Ximenez, which was longer and less intense than drinking the sherry on its own or in other cocktails. This made for a surprisingly straight-forward drink with a lasting finish and lovely, Christmasy nose.

A DBS creation, he add two tablespoons of mincemeat to a jam jar and topped it up with Jameson. It was left for three days before being strained.

This was absolutely delicious and easily my favourite of the cocktails that we tried. It had a distinctive nose of mincemeat, cinnamon and candied orange peel that wasn’t too sweet. The flavour was gorgeous: the very balanced and smooth, but full body of the whiskey is accompanied by a notable warmth at the back of the throat and in your stomach afterwards. There was also a slightly dry finish, The level of sweetness and flavour were just right – excellent!

[25ml Mincemeat-flavoured Jameson Whiskey, 25ml Single Cream – SHAKE]
Another delicious, albeit more faint, Christmasy nose; this time, of mince pies and ice-cream that have been sprinkled with cinnamon and nutmeg.
This is definitely a cocktail for fans of both cream cocktails and mince pies. It was incredibly thick, so much so that I thought it would be a good idea to eat it with a spoon (or eat it with an actual mince pie!), without being overly sweet or sticky. It tasted exactly like the mincemeat whiskey, in particular with the restrained, dry finish, but with a heavy, cream texture.

[35ml Jameson, 15ml caramel liqueur, 12.5ml red vermouth, 25ml pineapple juice, 2 dashes of Peychaud’s bitters]
This intriguing cocktail had a bright nose of caramel that was very creamy and slightly fruity. To taste, the start was dominated by the creamy caramel from the nose, which faded into the drier, woody whiskey notes, followed by the slightly acidic pineapple flavour. After a few sips, the wood and whiskey notes build up and become more dominant over the caramel and pineapple, which is very nice. There’s also a distinct warmth afterwards, having the perfect balance of warmth and smoothness.

With its distinctive warmth, dry woodiness and caramel nose, Jameson Irish Whiskey might not be the most complex whisky, but it is very sippable on its own and it is a surprisingly versatile cocktail ingredient. It worked very well in all of the festive cocktails that we tried, contributing its straight-forward character to each. It also proved a first-class base for DBS’s mincemeat whiskey – so much so, that I will definitely be requesting another batch to be made as we get closer to the holiday season.
– Mrs B
Jameson Irish Whiskey is available for Around £20 for 70cl nationwide