For many years now, I’ve been interested in Gordon’s Gin and related paraphernalia. A while ago, I picked up a little, grey Gordon’s Cocktails book and was fascinated when its contents revealed the fact that Gordon’s, amongst their other products, used to make both an Orange and a Lemon flavoured gin.

Flavoured gins used to be a lot more popular in western markets than they are today; in addition to orange and lemon, Gordon’s also made a spearmint/coolmint and a grapefruit gin. Beefeater had a flirtation with these in the 1990s, when they produced a series of flavoured gins, including pear*, lemon, lime and orange. In the USA, Seagram’s still make some flavoured gins, with their current “Twisted” gin range including the following flavours: lime, orange, purple grape, apple and raspberry.

My research has revealed that Gordon’s Orange Gin was available from 1929 and until 1988. The more generic term “Orange Gin” features in a number of old cocktail books, such as Hugo R. Ensslin’s “Recipes for Mixed Drinks”.

I’ve already detailed my recipe for Orange Gin here. So now, with the help of some vintage cocktail books, the cocktail database and a little imagination, I’m going to try it in some cocktails. 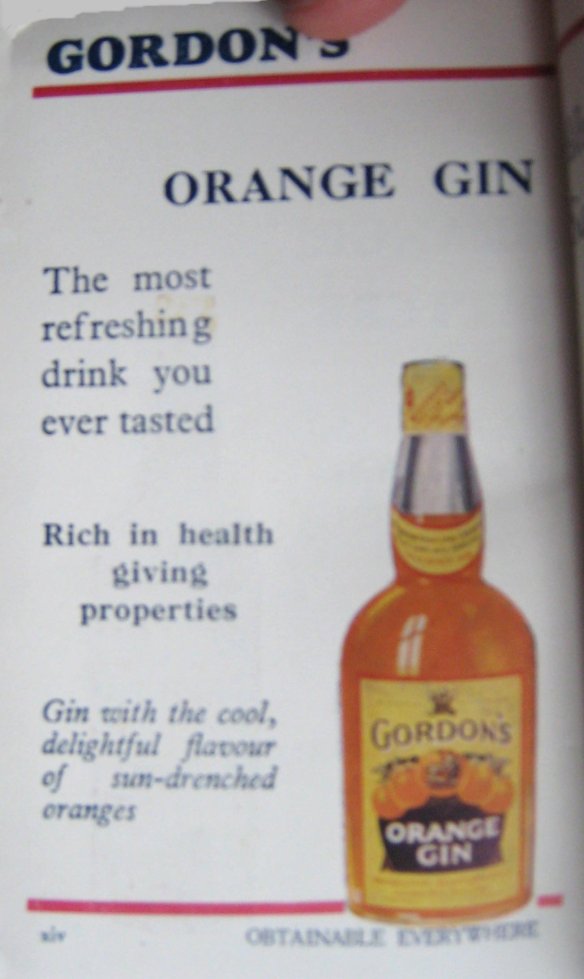 On its own, there is a juicy freshness, a little bitterness at the end but this is balanced out by the sweetness.

I recently had the opportunity to try some real Vintage Gordon’s Orange Gin which had a very strong nose of Orange Peel and Orange Blossom (like Orange Flower Water) it was quite syrupy in the mouth and also quite sweet, it was surprisingly similar to the Vintage Lemon Gin there was a little bitterness and some dryness too. After tasting this I sweetened my Orange Gin a bit more.

Before I start on the cocktails, I shall try some of the serving suggestions from the Gordon’s Cocktail book (late 1950s) for long refreshing drinks: mixing it with tonic water, ginger ale and, for a “comforting warmer”, taking it with hot water (this is apparently good in the winter, particularly before bedtime). The book also suggests that Orange Gin can be used as a substitute in any cocktail that uses gin and orange juice; the Bronx, for example.

Tonic Water (Schweppes)
Quite tasty; like a normal gin & tonic, but with a fresh burst of lemon.

Milk
A bit odd; not awful, but not great, either. This would be improved if it was warmed, but I’d really rather enjoy each of the ingredients on their own.

Now, on to the cocktails: 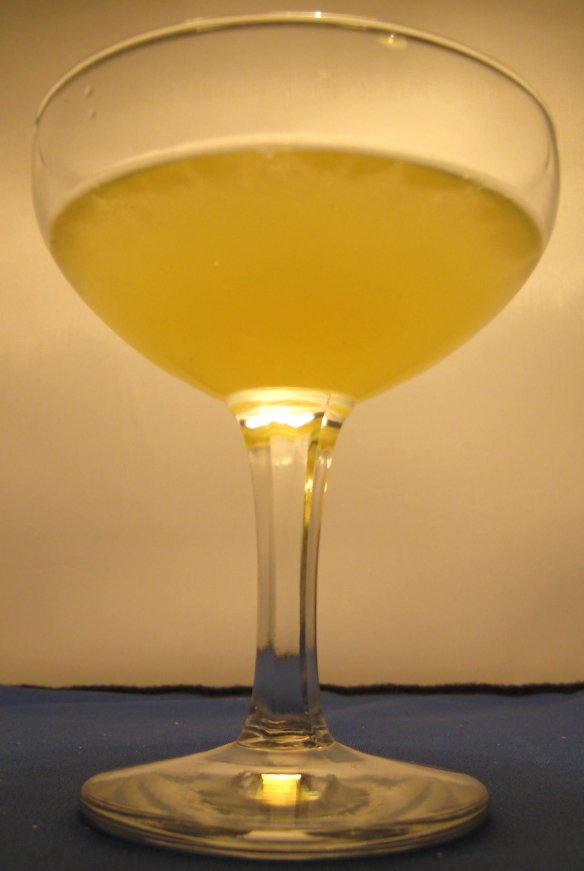 1) Orange Martini
[4:1 Noilly Prat Vermouth STIR]
The flavours of the Orange Gin come through clearly, producing a crisp and refreshing drink. I think this is one of the best ways to enjoy Orange Gin.

2) Misty Morn
[1/3oz Orange Gin, 1/3oz Passion fruit Juice, 1/3oz Drambuie: SHAKE]
Tasty and exotic with a hint of spice. Orange Passionfruit and herbs/honey of the Drambuie mix really well. Tastes a bit like sherbert, smell a bit like it too.

3) Moulin Rogue
[1oz Orange Gin, 1/3Oz Apricot Brandy, 3 dashes Grenadine STIR]
Fruity, but perhaps a touch on the sweet side; the apricot brandy makes it a bit jammy. The Orange Gin & apricot brandy do work well together, but, for my taste, it is just that bit too sweet. 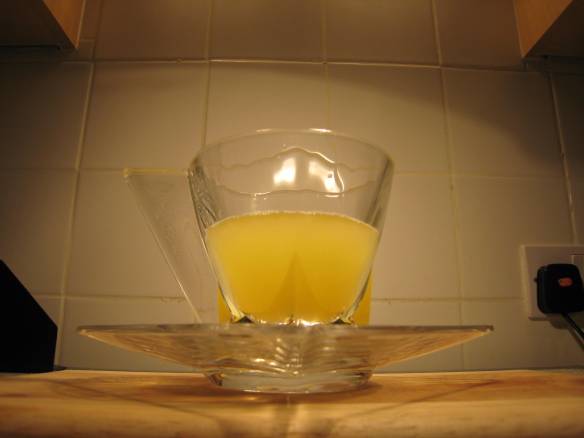 The Get Together Cocktail

4) Get Together
Invented by F.E. Ferris:
Surprisingly smooth. There is little initial flavour beyond that of the fruity squeeze of orange, but, gradually, the gin does come through, as do the herbal notes of the vermouth and the anise of the absinthe. Very smooth and exceptionally easy to drink.

5) Leap Year
[ 1 1/4oz Dry Gin, 1/2oz Orange Gin, 1/2oz Vermouth, 1/4oz Lemon Juice, SHAKE]
OK, but not great. This drink is a bit off-balance; it would probably improve if I used a more flavourful vermouth, such as a home-made variety. As a result of these experiments, I have discovered that I generally prefer to use the Orange Gin as the base spirit in a cocktail, rather than using it to modify another base.

6) Comet
[1oz Orange Gin, 1oz Lillet Blanc, 2 Dashes Maraschino, STIR]
This cocktail really works, similar to the Orange Martini but even better. The slightly softer edge of the Lillet blends nicely with the Orange Gin and hint of sweetness from the Maraschino stops the cocktail from being too dry.

7) Orange Milk Fizz
[ 1 1/2oz Orange Gin, 1oz Lemon Gin, 1tsp Sugar, 2oz Milk, 20z Soda, BUILD]
This was an interesting concoction and very much a product of its time; I can’t see many people drinking it in the 21st Century. Despite that, it is smooth and fruity, with a hint of cream. It sticks to the top of the mouth somewhat and, although it is pleasant enough, I don’t think it’ll catch on. 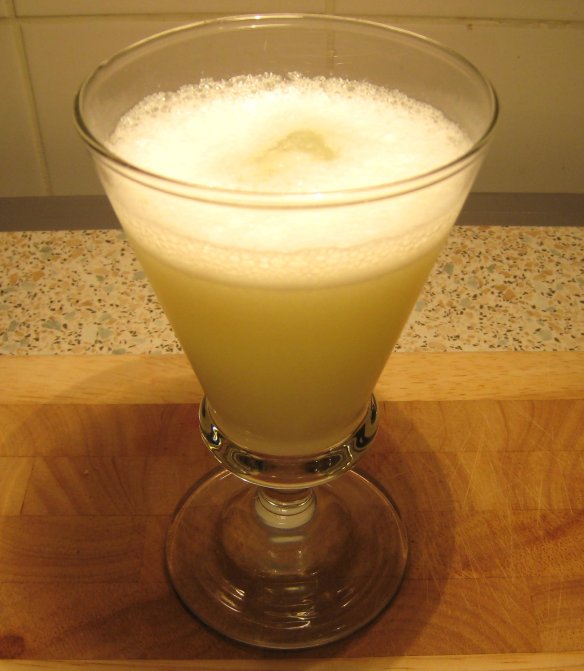 The Orange Gin does seem to work quite well, especially alongside simple and herbal flavours. The highlights of my experiments were the Orange Martini and simply mixing the gin with ginger ale.
One of the things that continues to fascinate me the most about the Orange Gin is that it has moved from booming popularity to obscurity, all within a few decades; but, with the current resurgence in period and vintage cocktails, as well as the resurrection of many other long-lost ingredients, maybe Orange Gin will ride again?

*Beefeater Wet was a gin produced by Beefeater from the late 1990s until the mid 2000s it was mostly sold in the US markets. Wet used Classic Beefeater as a base and then added Pear Essence (in a similar way that Hendrick’s add Cucumber & Rose Essence) the result was a slightly fruitier gin that was less citrus and juniper dominant (although they were still present). To my palette, it was a little softer and a little sweeter.
This was around the same time when Tanqueray released another “wetter style”, the much sought-after Tanqueray Malacca.