Anyone who is even slightly familiar with gin will be familiar with the connection between the spirit and the word “dry”. It is likely that this came about to distinguish a spirit from the opposite – in this case, “sweet” gin such as some Old Tom Gins – but, linguistically, the opposite of dry is also wet. Until recently, this was a label that had only been embraced by Beefeater Wet, but today’s gin is also described on the distillery website as “wet by definition”; the gin is Bainbridge Heritage Distillers Organic Douglas Fir Gin, which is bottled at 45.0%ABV.

On its own
Nose: Vanilla, a light hint of cider vinegar and juniper.
Taste: This is a soft and well-rounded spirit with cinnamon and ginger upfront, before a gradually building chorus of juniper and vivid pine – all that you would imagine from a Douglas Fir Gin. Superb.

Gin & Tonic
A rich and silky drink – almost sappy in places – with complex flavours of pine and fir: juniper berries, pine needles, and pine cones. There are then some woody notes, a touch of cedar, and some warm spice such as cassia, anise, and fennel. Lovely.

Martini
A rather tasty mix of spiced vanilla and pine. Clean and very crisp, this has a simple, but pleasant flavour and a long, dry spice finish.

Negroni
A warm, cosy nose with hints of spiced pear. The cinnamon really comes through, mixed in with fresh, bursting juniper berries; although the bitterness from the Campari is curbed slightly, this is a really good drink and I could happily sip a number of these over an evening. Tip top.

In Conclusion
Douglas Fir Gin is really excellent and whilst it veers away from the classic dry style, the inclusion of the fir means that there are still plenty of rich, green, piney notes that will appeal to traditionalists. It is a gin that works well, both when served on its own and in cocktails, but, personally, I would prefer to just sip and enjoy the spirit unadulterated.

~~~UPDATE~~~
On 12/12/12 it was announced that Tanqueray Malacca was being relaunched (in the US) in February 2013. It has also been confirmed it is the same recipe and the spirit tasted here so soon you can find out for yourself.
.
I can’t remember when I first heard of Tanqueray Malacca, but it must have been quite soon after I got interested in Gin and it has always been accompanied by a wistful sense of nostalgia of a lost gem.
Tanqueray Malacca was based on an 1839 recipe from Charles Tanqueray. Malacca was released as a “wetter” version of Tanqueray Gin (rather akin to Beefeater Wet, which was around for a bit longer approx. 1999-2005). The name comes from the Malacca Straits which is where Charles Tanqueray is thought to have first encountered the spices that were a key ingredient for this particular gin recipe.

From what I understand, the modern, Tanqueray Malacca was based on the standard four-botanical Tanqueray, cinnamon and some additional “secret spice” botanicals.* Tanqueray Malacca had a short life, mostly in the US market, from 1997 until 2000/2001. As you can see the usual red seal of Tanqueray was replaced with a gold one and the faded map and colour scheme gave the bottle a rather imperial look, not unlike the rather excellent Old Raj Gin.

There is a lot of intrigue around the product and I’ve even seen reference to it being used (when slightly sweetened) as an alternative to Old Tom Gin. But the important question is what does it taste like?

#1) Own
Some juniper but relatively subdued in comparison to usually Tanqueray. Still quite a lot of citrus and coriander and a little spice, after a few attempts I think I identified this as at least cinnamon and nutmeg. Remarkably smooth but still quite warming. With a drop of water it really opened up, in particular the non-juniper aspects of the gin.

#2) Gin & Tonic
Very soft and quite fruity and fresh. Silky and with less bite than many similar drinks. If you find most Gin & Tonic too bitters this may be a nice solution to that problem. Easy to drink and rather moreish.

#3) Martini (5:1 Dolin Dry)
Exceptionally smooth, the gin really let the vermouth through and there is minimal burn. Slips down very easy indeed, may not have the more intense juniper notes some Martini drinkers enjoy and not as crisp. I gave this to my buddy Phil (who is not usually a Martini fan) and he loved it.

#4) Pink Gin
This was recommended by Ted Haigh in Vintage Spirits and Forgotten Cocktails (2009) who suggests that the best two Gins to use in a Pink Gin were Plymouth and Tanqueray Malacca. I recently wrote an article on the Pink Gin for The James Bond Dossier Website (the drink features in the book The Man With The Golden Gun, where Bond specifies “Beefeater & plenty of bitters”) and so I did a three-way taste off  of Plymouth, Beefeater (47%) and Tanqueray Malacca. I’ll have to respectfully disagree with Mr Haigh on this point as Malacca came last; it just didn’t have the same strength of flavour as the other two. If you have a bottle, I wouldn’t recommend using it in this drink.

#5) White Lady
Another really smooth drink, crisp and very drinkable. It was slightly over-powered by the lemon juice but a very nice drink nonetheless. It was this drink that converted a friend of mine to White Ladies.

In Conclusion
I hope you’ve enjoyed reading this as much as I have writing it. I think that the mysterious Tanqueray Malacca is clearly a very smooth gin and although I didn’t think it had any stunning characteristics drunk neat it does have this unique ability to smooth out the cocktails it was mixed in. As much as a gin can be, it was a real team-player of an ingredient. It seems to be the catalyst of a good drink and I do think it’s a shame it was discontinued, but who knows what the future will hold? 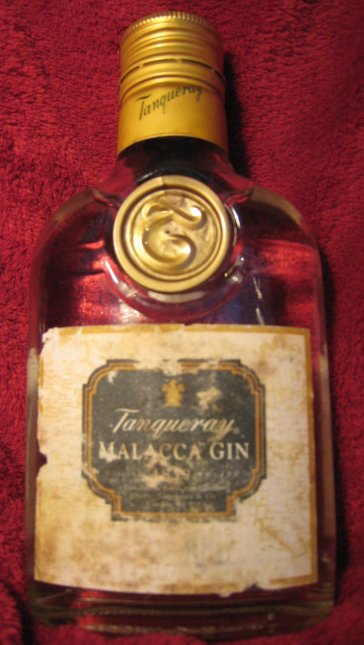 Epilogue
The fact that Tanqueray Malacca is not really Juniper-lead, as well as the suggested similarities to Old Tom, starts to make me think about New Western Gins (NWG) (typically defined as “non-juniper-lead” ). It also makes me question whether they are that “new” at all (this in no way takes away from some of the excellent quality New Western Gins out there). There is even some evidence, really, really scant evidence though, that there may have been a variety of Malacca Gins available at one time and that it could have once been considered a separate gin category.**

* After doing a bit of digging, there were three main spices that would have certainly come through the Malacca Straits (circa 1839) on the Spice Routes; nutmeg, cinnamon (now confirmed)***  vanilla and maybe cloves. Based on the history and another nosing and tasting of the gin neat I would guess that at least the first two spices were part of the “secret botanical mix”.
** credit for the inspiration of this line of thinking has to go to my good friend Mr. Harltey who is quite keen on the NWG = Old Tom idea.

*** I have found, from another source that cinnamon is a likely botanical but more likely Chinese cinnamon (also known as cassia). This is highlighted in some text by a former Tanqueray distiller.