Last year, I sought out the Chase Summer Fruit Punch (Fruit Cup), which was made exclusively for Bistro du Van in Soho. I thought that the product had a lot of potential, so I was intrigued to see what this year would bring from Chase.

Unlike their 2011 variety, Chase Summer Fruit Cup is bottled at 20%ABV (rather than 40%ABV), but it continues to be based on vodka. Vodka-based Fruit Cups are not unheard of: Pimm’s have made a vodka-based No:6 cup since the 1960s and some other brands have also created vodka fruit cups at one time or another. That said, it is still a more unusual choice of spirit.

with Lemonade
This has a very clean taste of lemon to start, with fewer deep, herbal notes and less bitterness than most gin-based fruit cups. Notably, it has more flavour than the lighter Pimm’s No:6, with tart blackcurrant and lighter, leafy green, herbal notes. This makes this drink perfect for late summer, being both light and comforting (reminding me somewhat of the “children’s cocktails” I used to have as a child, which were generally some variation on blackcurrant cordial and lemonade, although this is obviously more complex than that!).

with Ginger Ale
This makes for a more subtle drink, with the blackcurrant being balanced out well by the ginger ale. I used Canada Dry and a surprising amount of the ginger comes through (if you want even more fire, then I would suggest using Fevertree, Q or Fentiman’s latest offering). Once again, this lends itself to the months of August and September, what with the slightly warmer and more comforting notes.

with Bitter Lemon
Excellent; the fruity, slightly tart berry flavours work well with the crisp bitter lemon (I used Fevertree’s Lemon Tonic) to make an exceptionally refreshing drink, that would work especially well on a baking hot summer’s day. Delicious! Those who find many fruit cups too sweet should definitely try this!

with Tonic Water
I know at least one reader (he knows who he is) who prefers his fruit cup with tonic, and it’s not a bad drink in general. With Chase Summer Fruit Cup, it makes for
quite a dry drink with a fruity flick at the beginning, followed by tart berries and leafy green herbs on the finish. Clean, crisp and cooling. I used standard Schweppes and I thought that it worked well; with something like Fevertree, or Thomas Henry, I think the result would be even better.

In terms of seasonality, I think using Sparkling Elderflower or Rhubarb Lemonade would give the drink a more springtime feel and it could easily lend itself well to that. The ginger ale gives it an autumnal feel and the combinations with bitter lemon and tonic make superb summer sippers.

Negroni
I’m also keen to try fruit cups in some different contexts and so I decided to use it in the place of vermouth in a Negroni.
This make a lighter Negroni; one that was less herbal and cleaner. The Campari plays a strong role, maybe being even more dominant than usual, but it should appeal to
those who are fans of this bitter Italian drink, especially as a pre-dinner cocktail for the summer.

Having tried last season’s fruit cup, I think that this is most certainly an improvement: the flavour is more balanced and complex, and bottling it at 20%ABV rather than 40%ABV makes it more accessible and has resulted in a far more suppable vodka-based cup.

Chase Summer Fruit Cup is available for around £22 for 70cl from The Champagne Company.

Frequent visitors to the site may have guessed that we’re both rather fond of Fruit Cup (Pimm’s and the like); rather fitting, given the site’s name. But one fruit cup that is often over-looked is one that is vodka, rather than gin, based*; I am, of course, talking about Pimm’s (No.6) Vodka Cup. This was the sixth variety of Pimm’s to be introduced; for those who may not be familiar with the varieties, here is a quick rundown of all those that have, at some point, been available:

The No.6 Cup was added to the line-up in the UK at the same time as No.5 (Rye); the latter had previously has a successful launch in Canada. This was a time when international business was booming and Pimm’s wanted to tap into the American Whisky and Vodka market.

When the business was sold in to Distilling Company Ltd.** in 1969, some pretty serious “rationalisation” took place and all but the most popular No.1 Cup were discontinued. No.6 is interesting in that it was a favourite of the wife of the chairman of the new company and so she persuaded him to restart production, albeit in very limited quantities. As such, the production of No.6 only stopped for a few months at the most.

Originally, Pimm’s No.6 was known simply as a “Vodka Sling”, just as No.1 was known as a “Gin Sling”. However, today, it is described (on the label) as a “Vodka Cup” and any allusion to its numerical designation has been renegated to the back of the label.

Like the other cups, the Original Pimm’s No.6 bottle suggested a garnish of lemon and borage or cucumber, whereas today it recommends lemon, orange, apple, cucumber and mint. 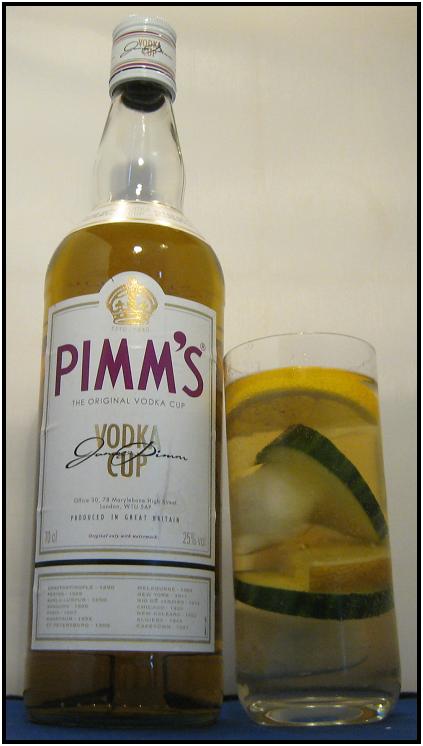 The flavour of No.6 is less intense than the gin-based No.1, and not just because vodka is typically smoother and less flavorsome than gin, but also because the mix of herbs and citrus seems lighter in this version. I’d say it was a little sweeter and a touch syrupy, even when diluted 3:1 with lemonade.

When choosing a lemonade, I would steer away from anything too sweet; perhaps Fevertree Lemonade, which tends to be a bit sharper, would be a good choice. Despite these differences though Pimm’s No.6 Vodka Cup is still exceptionally refreshing and rather moreish.

*I did once come across another Vodka-based Fruit Cup.

** Distillers Company was then purchased by Guinness in 1986 and merged with another of their subsidiaries (Arthur Bell & Sons) to create United Distilling. in 1997 Guinness merged with Great Metropolitan to form Diageo the Pimm’s Brand came as well. Thus the brand is now owned by Diageo.