Following on from the recent review of 6 O’Clock Brunel Edition comes another, high-strength and spicy gin – this time from Darnley’s of Scotland, who have released their spiced Navy-strength gin.

Bottled at 57.1% ABV, the gin is made using the same botanicals as the original Spiced Gin, but with an extra boost of juniper.

On its own
Nose: Bold, plump juniper upfront, followed by notes of cumin and cardamom with a touch of ginger.
Taste: This is full of strong flavours, with a great oily texture that coats the tongue and has a light sweetness to it. A touch of liquorice is accompanied by warm spice: cinnamon, cassia, savoury cumin and aromatic cardamom.

Gin & Tonic
A plump and juicy Gin & Tonic that works particularly well with a wedge of orange as a garnish. The anise comes through, along with flavours of sweet cumin and hints of ginger and cardamom.

Martini
This makes a very strong Martini, as you might expect from the high ABV, but in a small, 1oz portion it is perfect as a small, but punchy pre-dinner cocktail. The spice is intense and works well with the flavours of the vermouth. Serve super-chilled; ideally, poured straight from the freezer.

Negroni
A pleasantly savoury Negroni with notes of cumin and caraway coming through, along with ginger. This gin gives the drink a light salinity, whilst also keeping the classic bitter-sweetness of the other ingredients in check.

With Cola
The exotic spice notes work especially well with the cola and the strong botanical flavours that come from the Navy-strength really stand up to the mixer. This is a great example of a Gin & Cola.

In Conclusion
I think Darnley’s Spiced Gin works particularly well at a higher ABV and the extra juniper gives the gin an added boost. My favourite drinks were the mini, yet potent Martini and – surprisingly – the gin mixed with cola.

Many readers will be familiar with Joanne Moore and the excellent work that she has done in creating the floral Bloom Gin and the herbal Berkeley Square. The latest installment in her gin range is spice-led, with Ophir Gin. This gin, like the others, is bottled at 40% ABV and features Juniper from Italy, Coriander from Morocco, Angelica from Germany, Orange from Spain, Grapefruit & Cumin from Turkey, Cardamom Ginger & Black Pepper from India and Cubebs from Indonesia. 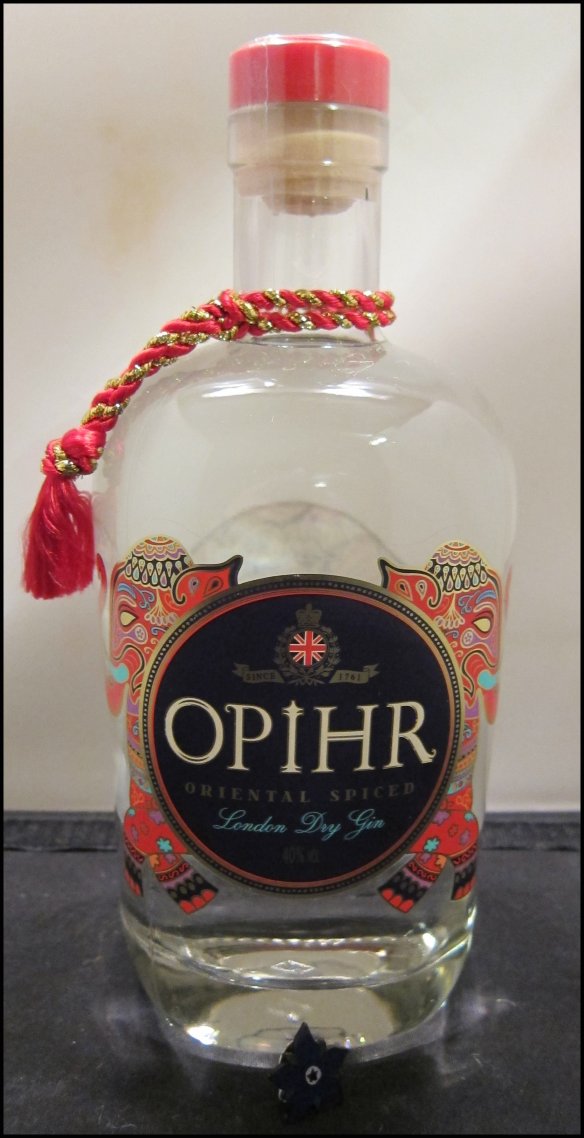 On its own
Nose: Complex savoury spice: caraway, cardamom, cassia, nigella seed, cumin and some juniper dryness, too.
Taste: Smooth and with a good, clean flavour: dry juniper, coriander and citrus to start, then the spice approaches: hints of cardamom, cumin, caraway and a slight menthol note towards the end.

Gin & Tonic
The tonic seems to really accentuate the spice elements of the gin and there is a balance of both sweet spice and some more savoury flavors, such as cumin. Given the colonial nature of the gin’s branding, it is excellent that this works so well in a Gin & Tonic. There’s also a great burst of cardamom on the finish.

Negroni
A lively Negroni that is very spicy, but not too bitter. The vermouth seems neatly accentuated by the spice notes of the gin, although that classic Negroni bitterness is definitely there, courtesy of the Campari.

Sweet Martini
The sweet, herbal notes of vermouth work well with the complex, spiced character of the gin, making an good, if intense after-dinner digestif.

In Conclusion
There are other spiced gins on the market, but they seem to either side with sweet spice (cinnamon, nutmeg, cassia) or savoury spice (cumin, ginger, pepper); Ophir is nice in that it has a little of both. My favourite drinks of the above were the excellent Gin & Tonic and the intense Sweet Martini.

I’d heard a little about a new gin project from Wemyss Malts, the folks that brought us Darnley’s View Gin, and so I was very pleased when, last week (on our second anniversary), I received a bottle of Darnley’s View Spiced Gin.

This is a small batch London Dry Gin with added warming botanicals. I’m sure this will come into its own during the Autumn and Winter months, but, with the rainy British weather this weekend (just in time for the combined sporting extravaganza of The British Grand Prix, Wimbledon Final and Chap Olympiad), I’m sure that it’s equally welcome in glasses across the country today. 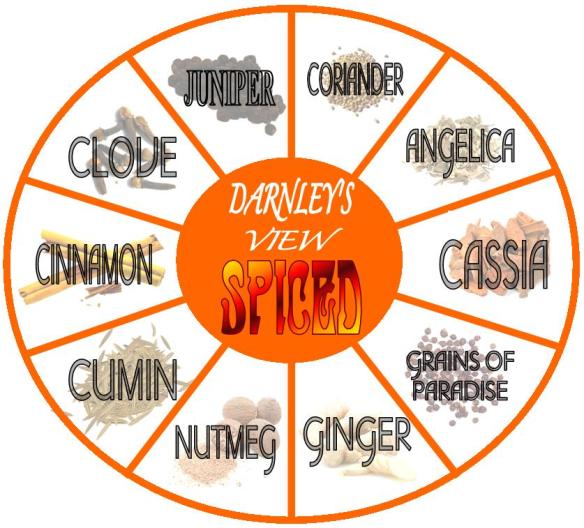 The gin is bottled at 42.7% ABV, which is slightly stronger than the original Darnley’s View; the additional strength is said to bring out the flavours of the spicy botanicals a little more.

On its own
Nose: Dry and spicy, with ginger, cinnamon and maybe even a hint of turmeric. Complex and unusual.
Taste: Wow – this is a really spicy gin! It momentarily blew my mind! First off, the classic notes of juniper and citrus appeared, but then the flavour deviated down the spice route, with warm, savoury, spicy notes, such as cumin, ginger and even a touch of paprika or chilli. These flavours are well balanced and this drink really is very different to any other gin that I have tried.

I previously mentioned the seasonal attractiveness of the gin, but, in the spirit of innovation, I wanted to try it in a variety of seasonal cocktails.

1) Fruit Cup
I’ve experimented a lot with Fruit Cups, but I’ve never really gone down the spicy and savoury route (a missed trick there!), but with Darnley’s View Spiced, this drink really delivers. It was cool and refreshing, with a long, warming spiciness towards the end. As such, it is probably more of an Autumn drink than a Summer one.

2) Gin & Tonic
The savoury, spicy notes are slightly more subdued in this drink, but nonetheless work well with the tonic, creating a very unusual, but refreshing drink. I tried this without garnish and I’ll have to experiment a bit more before coming to a final conclusion on what’s best to use; I think lemon or lime would work best. It may also be interesting to try it alongside a more herbal tonic, such as 1724 or Mediterranean.

3) Collins
This was quite a refreshing drink, but the clean and relatively neutral flavour didn’t seem to go particularly well with the spicy elements of the gin; perhaps some adjustment is needed, but, using my standard recipe, this was not the best way to enjoy the gin.

4) Dry Martini
This made a very smooth & spicy Martini. I mixed it using a 5:1 ratio and, although a lot of the flavour came through and there was certainly potential there, as it stands, the drink still needs some work and seemed unbalanced and slightly sickly. I’d be keen to try it in a Sweet Martini.

5) Gin Buck
Overall, this had a good mix of refreshment and spicy warmth, making it great if we get an Indian Summer; with a savoury spiciness somewhat reminiscent of food from the subcontinent, this drink couldn’t be more fitting. The flavour of the gin comes through well and the lime adds a zesty bite.

6) Negroni
In this cocktail, you get the classic bittersweet mix of a Negroni – crisp and refreshing – plus an extra kick of spice, as if someone has added a pinch of something from a bag that has made its way across the Ottoman Empire. I’m a fan.

7) Gin Toddy
This was a very warm and intensely tasty gin toddy; exactly the sort of warming drink that you need of a Winter’s evening or after a walk on a wet Saturday afternoon like today. No extra spice is needed and there is a unique, fiery kick that you don’t get in most toddies.

8) Ginger Old fashioned*
A light nose of ginger and juniper was supported by hints of savoury spice and salt. To taste, it was wonderfully dry for an Old Fashioned and had an initial flavour of dry juniper that was immediately followed by lots and lots of spice, finishing off with a flash of warm ginger. Different, but delicious, especially if you usually find Old Fashioneds a little sweet.

9) Sweet Martini
A very herbal and intense drink with plenty of sweet and savoury spicy notes. Very complex and rather rousing to the appetite. Much better than the dry version.

In Conclusion
I think that Darnley’s View Spiced Gin is a great innovation and really adds something new to the ever-expanding gin market. It works better in some Classic cocktails more than others, but it nonetheless has a lot of potential, especially in the creation of new drinks.

Of those that we tried, our favourites were the Fruit Cup and both of the Winter drinks.