So, it’s back! After a brief hiatus, Seagram’s Sunday has returned, thanks to my dear firend in New Jersey, Seva, sending me Segaram’s Twisted Pineapple Gin in a recent care package. Pineapple Gin used to be all the rage but has since fell upon hard times and, as such it featured in our Raiders of the Lost Cocktail Cabinet.

On its own
Nose: Pineapple chunks and a touch of sherbet, with hints of apricot and peach, too. At the end, there’s just a touch of nail polish.
Taste: Pineapple initially, followed by a distinct sweetness and a touch of alcohol. In the middle, the gin appears, fresh and bitter, before a finish of fleshy, juicy fruit. 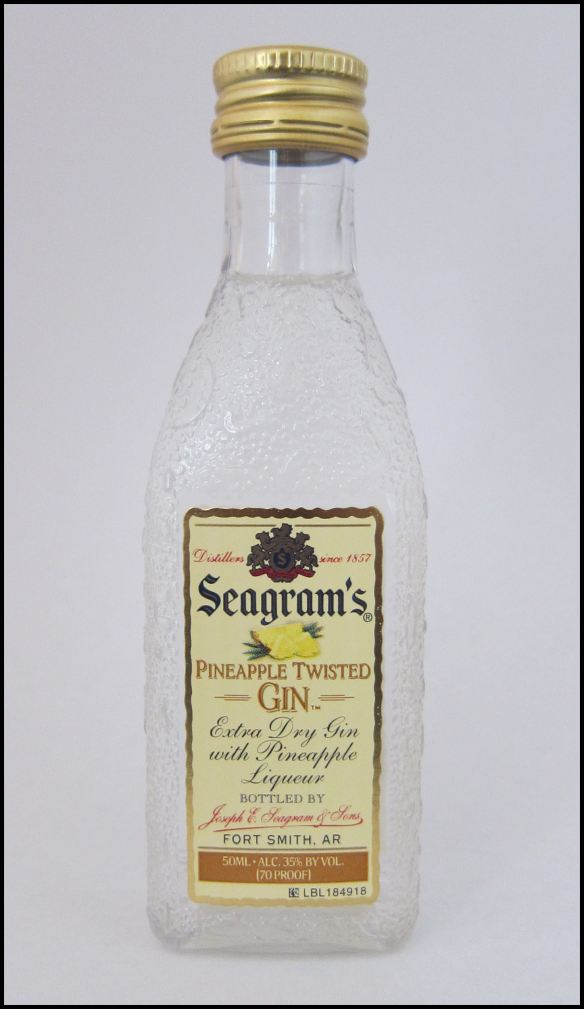 Gin & Tonic
Not too bad a drink: pineapple comes through quite strongly, tasting like pineapple chunks sweets. Quite nice, really; this tastes – as you would expect – like a pineapple Gin & Tonic. This suggests that it would work very well in other long drinks.

Martini
This has a scent of juicy pineapple. An initial sweetness, very much like that of pineapple cubes, is followed by an odd, oily alcohol, before finishing with tinned pineapple fruit. There’s some dryness in the middle. This is quite a sweet Martini, but is exactly what you would expected from a pineapple gin Martini and not bad at all.

Negroni
Wow! What an awful clash of flavours. I had high hopes for this (Hoxton makes a lovely, if unconventional, Negroni), but this has a mix of flavours with no balance and a horrible, sickly finish.

In Conclusion
I was pleasantly surprised by this pineapple gin, although the Negroni was a disappointment. Having made my own pineapple gin previously, I think that Seagram’s Twisted Pineapple is a good, and far more convenient, alternative to making your own. It has a lot of potential with a lot of appeal in long, mixed drinks with mixers such a lemonade, orange juice and soda water. My favourite drink was the Gin & Tonic.