Pink Lemonade is usually sparkling, but can be still, too (Minute Maid make such a variety in the USA) and products fall into two main characters:

i) Coloured
This is regular lemonade that has had dye added. The flavour is not changed, although sometimes extra sugar is also added.
ii) Flavoured
In this instance, the colour comes from something that also adds extra flavour to the lemonade, such as: grenadine, cherry, strawberry, cranberry, red grape or raspberry. 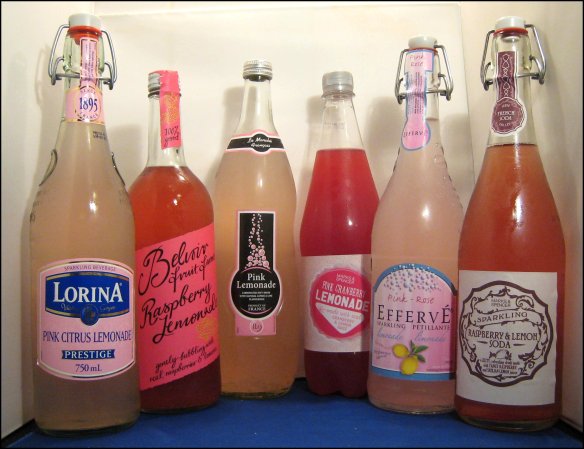 The exact origins of Pink Lemonade are disputed, but here are two popular versions of its history:

In 1857, Peter Conklin (a clown) was in Texas with a travelling circus. He was making lemonade that sold very well; so well, in fact, that he couldn’t keep up with demand and eventually his water supply ran out.

His sales doubled that day and, since then, Pink Lemonade and the circus have been closely linked. However, that method particular of production was short-lived, with strawberries soon being added as well as lemons in order to add the distinctive colour.

At the age of fifteen, Henry E. Allott ran away with a circus and obtained the lemonade concession. One day, whilst mixing a tub full of the orthodox yellow kind, he dropped some red cinnamon candies in by mistake. The resulting rose-tinted mixture sold so surprisingly well that he continued to dispense his chance discovery.

It certainly seems that Pink Lemonade and the circus have been linked for a very long time, whichever (if either) of these two versions is true.

Finally, I found an interesting reference to a Pink Lemonade stand in Minnesota being used as a front for the illicit sale of alcohol; if a punter gave the right password, they’d get the hooch.

For our tasting, we have a variety of just-coloured and flavoured-and-coloured pink lemonades. It is noteworthy that 4 out of the 6 that we tasted were made in France (but purchased in the UK). Here are our thoughts.

A light salmon pink, we found this to be tangy, with notes of lemon and lime and a hint of creaminess. It had medium fizz and was altogether rather tasty and very refreshing. Slightly sweet, but not cloying or sickly. Great.

Lorina Pink Lemonade is available for £2.46 for 750ml from Waitrose

This is made with pressed raspberry and lemons, mixed with sparkling spring water. It’s a bright brick red with some sediment. Its nose is distinctly of strong, ripe raspberries; Mrs. B also got a more savoury hint of tomato. There was minimal fizz; almost none. It was very tart from the combination of raspberry and lemon, with a fresh flavour that wasn’t very sweet at all. Very refreshing and thirst quenching. I really liked it, but Mrs. B found it a bit too sour.

Belvoir Raspberry Lemonade is available for £2.19 for 750ml from Waitrose

A light pearly pink and slightly translucent, almost as if it has louched, this was pleasant, with a crisp nose of fresh lemon. It was very fizzy, with strong, small, intense bubbles. To taste, there was some lemon and it was very sweet, but a bit cloying at the end. The main characteristic is the effervescence, which dominates the flavour. Nice, but could be better.

Aldi Pink Lemonade is available for £0.99 for 1 Litre from Aldi.

This was a delicate, rose pink and tasted jammy, just like the jam in a jam doughnut. On the nose there was also a little citrus. It had medium fizz and was nicely balanced. Quite sweet, with a creamy raspberry flavour, similar to the combination of raspberry jelly and ice-cream. Drinking it reminded Mrs. B of eating a jam doughnut (the combination of the doughnut’s sugar coating and the jam). There was also a little lemon tartness on the end. Overall, it’s quite a confectionery beverage, but – overall – quite nice.

Another pearly pink soda, but this one has a little silver shimmer to it, too. There was very minimal nose; maybe a tiny bit of lemon. Medium-to-high fizz. There’s minimal taste with some lemon, but there’s a very short finish and it’s rather cloying. There’s not much going on; this was rather one-dimensional.

Effervé Pink Lemonade is available for £2.49 for 750ml from TK Maxx.

A deep, rich scarlet in colour. This had a jammy, fruity nose, with hints of summer berries, cranberry and lemon. Great. It had medium-to-high fizz and was full of flavour; it was tart and slightly sour from the cranberry, with hints of mint and lemon. This was really nice and a great cooler. Mrs. B additionally got some sour notes that reminded her of fizzy strawberry laces.

A Pink Gin with a zip of Pink Lemonade. The lemonade lightens the drink, making a bitter-sweet cooler. It was fresh and works even better with vodka.

A nod to the Henry Allott origin story: 15ml of Cinnamon Liqueur added to 35ml of Vodka; top up with 100ml of Pink Raspberry Lemonade.