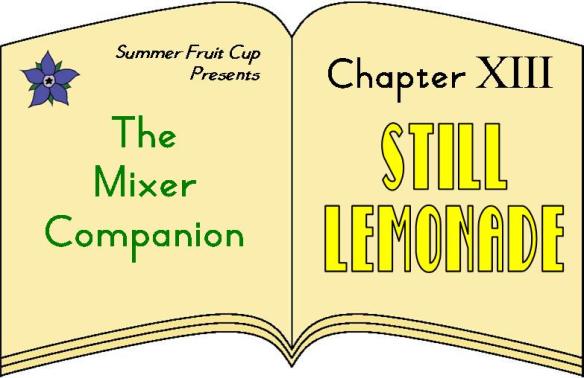 The original lemonade predating the rise of fizzy pop.

Today, this enjoys much greater popularity in the U.S. than in the U.K. and Europe, where it is more common to see Fizzy Lemonade or Cloudy Lemonade, both of which are sparkling. In fact, in the U.K., Still Lemonade seems to be sold just as much as a healthy juice drink as a recreational soft drink.

This one had real bits of lemon floating in it! I thought it had an authentic texture, being both smooth and tart; the balance of tartness and sweetness was just right. Pretty good.

Still, this was slightly refreshing and very bitter. It started off with the flavour of fresh, cloudy apple juice, followed by a strong pang of grapefruit and a bit of lemon. Despite being 100% fruit juice, this managed to not be too sweet and was – understandably – very fruity. I liked it, but didn’t think it was a typical lemonade**.

Quite crisp but also very very sharp and also pretty sweet, it really lacks an balance and leaves an unpleasant taste in your mouth. Not refreshing either.

Quite nice initially, with lots of lemon flavour, after a few sips, this became cloying and watery, clinging to the teeth. If served with lots and lots of ice, I thought that this was okay (tasting somewhat like a melted ice lolly), but not on its own.

Not bad; this was quite tart, but in a fresh, crisp way. The primary taste was of lemon and the flavour tastes like it hasn’t been interferred with at all. Not too sweet, this was well-balanced and refreshing. I thought it was rather close to homemade lemonade, actually; what you would expect from a classic style.

Very crisp and quite fresh, pleasantly it is neither to sweet nor harshly tart. I gather that the vanilla helps to soften the flavours. This is very easy to drink and I think has wide-appeal. If you really like a tartness in a lemonade that sucks your cheeks in then this isn’t for you. But as a simple delicious way to cool down on a hot day, here you go.

Of all of the types of lemonade, this must be the easiest to make; mostly because no carbonation is necessary. Although additional flavour embellishments can work well, Still Lemonade consists of three fundamental ingredients: lemons, water and sugar.

Combine ingredients, in  a bottle and shake vigorously for 30 seconds to dissolve sugar. Refrigerate.

Given the importance of the water in this recipe, I suggest giving it some consideration; whilst you might not want to use expensive bottled water, I would advocate filtering your water through a Brita device or some such system before using it. Given that we live in a hard-water area with a high calcium carbonate  content, this is essential for us.

Clean and quite tart, this was fresh and had a long, lemony finish. There was some sweetness to balance out the tartness although ti was quite subdued. I thought that this one was more distinctive and recognisable than the other homemade lemonades, whilst also being more straight-forward.

6(b). Homemade – made with Figi bottled water

This made a much softer lemonade; the edge seemed to be rounded off of the tart lemon flavour, producing a very clean, but less crisp taste. Very, very soft.

Again, this lemonade was very crisp and clean, but also seemed slightly sweeter and duller than the others. I thought it was refreshing and liked it.

Fresh and delicious the tartness of the lemonade contests nicely to the sweetness of the Triple Sec and the sweet oaky elements of the Jack Daniels. Simply superb and very refreshing.

* I don’t think that the Tropicana is made in the “classic” style, but I nonetheless think that it’s a good drink and, ultimately, for me, that is what really matters.

** Tropicana has received a bit of flack recently and was even features onthe BBC Watchdog consumer rights programme. Why? Because it contains 67% apple juice, 24% grapefruit juice, and only 9% lemon juice. Whilst I understand the complaints, I can also see how difficult making a 100% fruit juice lemonade with no added sugar would be; it’d be quite a challenge. After all, we wouldn’t just want a bottle of lemon juice!

However, it’s also worthwhile noting that, despite the fact that the Tropicana advertises itself as having no added sugar, it contains only slightly less (albeit natural sugar) than the Waitrose (with sugar); they have 9.5g and 10.3g per 100ml, respectively.

Some readers may have caught our Tasting of 17 Sloe Gins, but, in the in the interests of thoroughness, we did not just try these sloe gins on their own: we also tried them mixed in Long Peddlers, thanks to some bottles kindly sent to us by Fevertree.

A Long Peddler Made with Fevertree Lemon Tonic (Bitter Lemon) and Gordon's Sloe Gin in a 2:1 ratio.

Background and history on the Long Peddler is very thin on the ground. The recipe is simple: a measure of sloe gin topped up with bitter lemon; a bit like a gin and tonic. My best guess is that it was created as a cooler for the summer months so that sloe gin could be enjoyed all year round and it certainly achieves this purpose.

I imagine the “long” came about because it makes a long drink, Recent research points to the fact that the Long Pedlar was original made using Hawker’s Pedlar Sloe Gin, it was a long way to drink the sloe gin.

Either way, it seems to be an established drink among sloe gin drinkers and, when I was speaking to Fevertree, they also suggested making it with their Lemonade (Sloe Peddler) as an alternative to bitter lemon.

Fevertree Lemonade is carbonated, but it’s a distant cousin to the likes of 7UP and Sprite, which nonetheless do still have their place. With Fevertree’s Lemonade you can really taste the lemon juice and it doesn’t have any artificial sweetness that you may find with others; it is still quite fizzy, but it doesn’t leave you with that cloying feeling in your mouth.

Fevertree’s Lemon Tonic (their version of Bitter lemon) is refreshing, but a little bitter; however, when you consider that it has quinine in it, it’s not so surprising. Once again, this is a departure from the sharp, sweet, and turquoise drink presented as bitter lemon by others and I believe it was renamed to take a step away from this image. 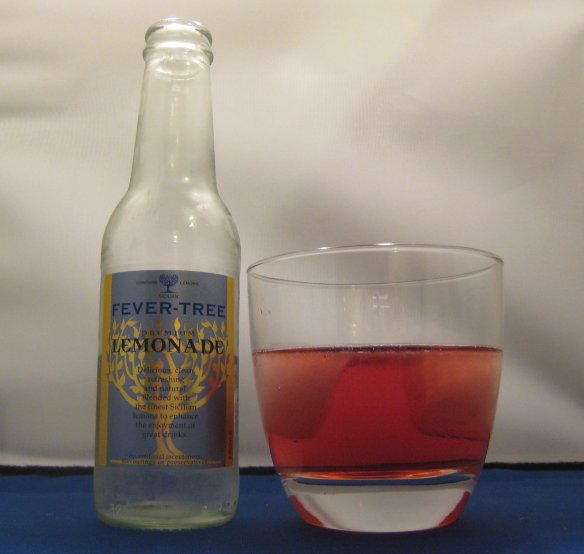 A Sloe Peddler made with Fevertree Lemonade

But the most important question is how did they mix with sloe gin? After various tests, we found that Gordon’s worked best with the Lemon Tonic and probably made the panel’s favourite Long Peddler of the evening.  SLOEMotion and Bramley & Gage Organic also mixed very well with the Lemon Tonic.

The Lemonade was rather more surprising, I had never tried it before and wondered how well it would work. It created a lovely drink when mixed with the Lyme Bay Sloe Gin (this drink was my personal favourite). In the pairing, once again Bramley & Gage worked very nicely in a Sloe Peddler.

So if you ever want a refreshing drink and you have some sloe gin to hand, why not try a Long (or Sloe) Peddler?