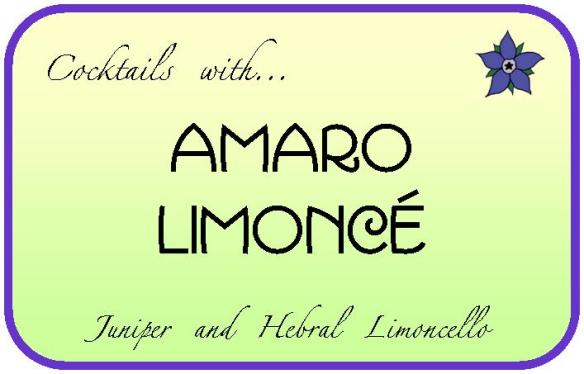 We’ve reviewed a few products made by the Italian firm, Stock, in the past and I have been impressed by many of them. As such, I was pleased to find out about a variety of Limoncello made by them that also contains herbal flavourings.

Limoncé Amaro is described as a herbal lemon bitter and uses an infusion of more than 30 herbs, including: gentian, juniper, dittamo, angelica, china, cera, thyme and coriander. I’m sure that those of you who are familiar with gin botanicals can see why this product was of such great interest to me.

Limoncé itself is the best-selling commercial brand of Limoncello in Italy; in a country where most people have their own family recipes (not unlike British Sloe Gin), I think that is quite an accolade.

1) Own
Colour: Brown, like iced tea.
Nose: Lemon tea, with hints of juniper, pine, lavender, and a touch of cherry cola.
Taste: Aspects of a herbal remedy accompany a sweet, cherry syrupy-ness. Lemon flavours were followed by an intense, sharp bitterness from the juniper. The bittersweet mix is somewhat reminiscent of a Negroni and, for a single product, the flavour profile is unique.

2) With Tonic
This was a very, very flavourful drink: some menthol comes through, as does some anise and juniper. On the downside, it is a touch on the sweet side and perhaps a little sickly for some. In contrast, the finish is rather bitter.

3) On the Rocks
With a little ice melt and a lower temperature, this is a pleasant way to savour the finer points of the liqueur and the impact of those 30-odd herbs. The citrus of both orange and lemon came through, along with a touch of sweet creaminess, which is followed by an array of herbal flavours including, notably, bitter juniper.

4) White Lady
Although this had the clean crispness of a White Lady, the sweetness from the Limoncello nicely balances out the tart lemon. In addition to these flavours, there was a complex, but not heavy or overbearing, herbal character. Very well balanced and a great way to enjoy the liqueur.

5) Fruit Cup
A simple mix of gin, red vermouth and the limoncé, I think this could easily be enjoyed with either lemonade or ginger ale. It was a particularly good way to enjoy the array of floral, herbal and citrus elements of the liqueur, and created a lovely cooler that could be well-received when served in a pitcher and enjoyed with friends.

6) Negroni
This cocktail had all of the elements of a traditional Negroni, but with an additional, sweeter lemon note; this was well-balanced with the bitter juniper and lavender of the liqueur and the bitter, herbal Campari. Although it might be a bit sweet for some folks, I quite liked it.

7) Alexander
To make this Alexander, I substituted cacao for the Amaro Limoncé, which adds its own bitterness; one that, in a normal Alexander, you would usually associate with chocolate. I can’t quite work out whether I like it or not, but it certainly has its positive points and there’s great potential in mixing the liqueur with cream, just so long as you get the balance right. Mrs. B summed it up well with “herbal ice-cream”.

8) Old Fashioned
This had a fresh, slightly fruity nose, with lots of the whiskey coming through. To taste, however, the Lemoncello Juniper made itself more well-known, with lots of fresh, herbal, Mediterranean notes that transformed this into a fascinating Old Fashioned. Despite this herbal edge, the start was also quite sweet, which faded pleasantly into the sweet woodiness of the bourbon.

9) Collins
A clean and lighter way to enjoy the Amaro, which is quite heavy herbal and a touchy syrupy, without taking away of its character. This could work very nicely as a pre-dinner drink or something to have between courses of a meal.

In Conclusuon
This is an unusual and slightly niche product but for folks that like gin and limoncello or something unusual Amaro Limoncé is worth trying.
My favourite drinks were Fruit Cup, Negroni and Old Fashioned.