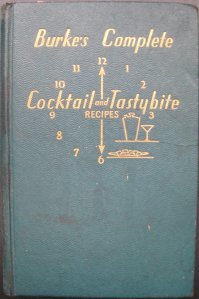 I do not recall exactly when or where I got my copy of Burke’s Complete Cocktail & Tastybite Recipes, but I am sure that the term “tastybite” was a major factor in acquiring it.

Written in 1936 by Herman “Barney” Burke, this 8” book endeavours to detail the etiquette of mixing, serving and drinking beverages, with a  selection of cocktail foodbits recipes thrown in.

The author believes food and drink to be brothers and proclaims that, in consideration of their health, the wise drinker (and I’m not sure how many of those I have met) will accompany their cocktails with tastybites before, during & after the drink.

So it is clear that Mr. Burke certainly has his opinions and these are not restricted to the present; he has his views of the future too. Here are two of his predictions:

1) (The) cocktail period will probably pass to make way for (people) learning and enjoying drinks as connoisseurs.

Interestingly, you could definitely argue that the first one has come to pass; as for the second, well, I’ve had some nice Californian wines, but I’m far off making a definitive decision.

Burke’s is famous for containing one of the first written recipe of the Brandy Alexander but in addition to this the book contains recipes that I have not been able to find elsewhere (at least not without reference to this volume) so, in the name of experimentation, I tried a couple out:

1) Thunderbolt
Boom! This is a Thunderbolt. This golden, aptly named drink packs a punch, but its shaking means it’s got a little less edge than you might expect. I mixed this with Seagram’s Gin, Seagram’s Whisky and Brandy. It has a strong flavour but, like The Vesper, you’d only need one before dinner. 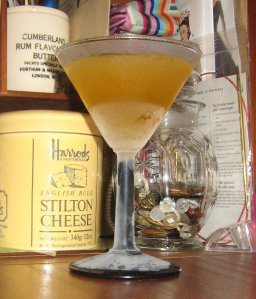 2) Harvard Brandy Cocktail
This has a sophisticated feel with a full flavour: a balance of herbs and spices. As this is stirred, it makes the drink that bit smoother and I think it makes a charming alternative to a Manhattan. The brandy and vermouth mix well, with the sugar syrup off-setting any bitterness, and the Angostura Bitters binds the drink together in its usual fashion.

In Conclusion
Burke’s provides an extensive selection of cocktails and, more unusually, tastybite recipes. I haven’t focused on the latter so much, but the five types of caviar canapes are not to be missed. I also enjoyed Barney Burke’s insights and soothsaying of the bar world past, present and future, and the pages at the end for “Your own recipes” is a really nice touch.
Is the book essential for a fledgling vintage barroom bookshelf? No, but I am very glad it’s on mine.

A reprint of Burke’s Complete Cocktail & Tastybite Recipes is available from Createspace and Amazon and is currently priced, rather reasonably, under £10.