Boodles Gin has, for a long time, been my standard answer when anyone asks me, “What’s your favourite gin?”.

Anyone who has ever expressed their interest in the juniper spirit will know that this can potentially be a tricky situation; it depends on what circumstances you’re in, etc., but all your questioner really wants in response is a name.

Luckily for me, a few years back (pre-SummerFruitCup and before I could identify any gin brands by taste*), some friends and I undertook blind Martini and Gin & Tonic tastings with 20 different gins. For me, Boodles came out on top both times; and so my love affair with Boodles began. What I liked – and still like – about it is that it’s clean, balanced, and has good, but equal measures of the different gin characteristics (juniper/citrus/herbal), with a good, clean hit of cardamom, too.

Boodles Gin was originally produced by the Cock Russell & Company Ltd. (a name still associated with the gin) and was established in 1845. It is thought to have been named after the Gentleman’s Club in St. James’s whose membership has included, amongst others, Sir Winston Churchill, Ian Fleming and David Niven. 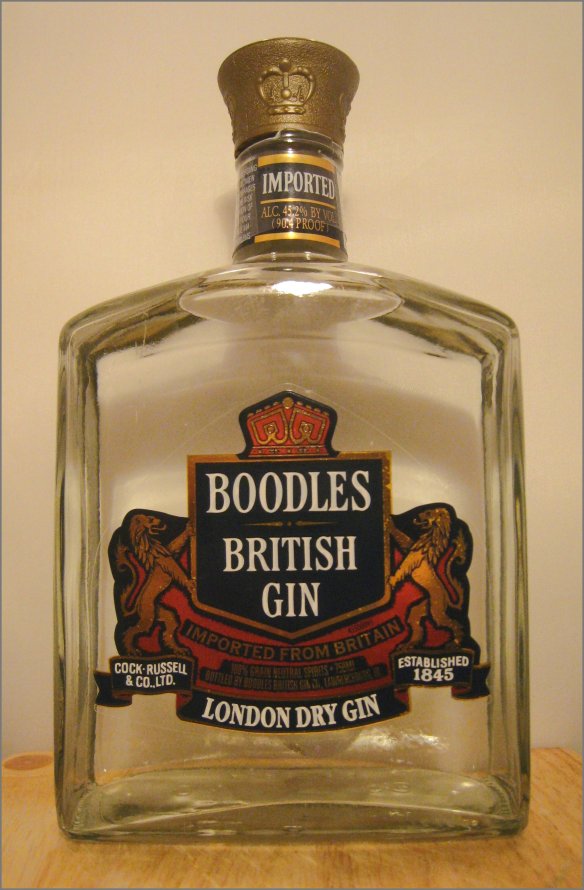 One of my highly-prized bottles of Boodles Gin

Production details on the gin are hard to come by, but Boodles is currently made by Joanne Moore at Greenall’s Distillery in Warrington**. For many years, it been shipped out as a concentrate to the USA, where it is mixed with Neutral Grain Spirit and then cut down with water to the bottling strength of 45.2%.

I did find some additional information, which I have not been able to personally double-check***, from Bob Emmons’ ‘The Book of Gins & Vodkas’. He suggests that Boodles is produced in a vacuum still, which, back in 2000, it would have been the first of its kind. Mr. Emmons also suggests that juniper, coriander, sage, cassia bark, nutmeg, rosemary, caraway and angelica are all a part of the botanical mix.

Around 2005, any bottles of Boodles that you could find in the UK had to re-imported from the US and were sold for around £20 a bottle. It then disappeared from UK shelves for five years, up until last year, when The Whisky Exchange got it back in, selling for around £35 a bottle.****

During those five years when it was difficult to come by , I found myself rationing my Boodles and persuading any friend/relative/co-worker who was going to the US to try and bring me back a bottle or two.

A rather tasty Martini

On its own
nose: fresh and clean with juniper, citrus and a hint of vanilla
taste: juniper and then some earthy notes, including cracked black pepper, then citrus and cardamom. A little warmth at the end but no real burn at. Powerful but still easy to drink with plenty of personality and bold flavours. Despite it’s Classic flavour profile it has a quality that sets apart from other classic London dry Gins.

Gin & Tonic
Citrus with a hint of floral initially then some cardamom. A rather dry gin and tonic but still cool crisp refreshing and rather excellent. Well balanced between flavour and refreshment.

Martini
A powerful drink by clean and crisp like a shard of ice. exceptional pure with a slight viscosity and flavour of anis and vanilla as well as juniper and other dry herbs.
One of my favourite drinks. 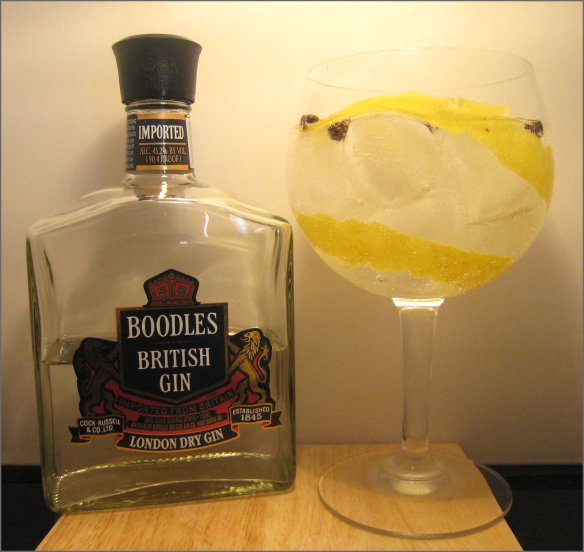 Gin Tonica
The balloon or coupet serve for a G&T seems to be raging in the UK at the moment; an invasion from Spain. On a hot day like today, I’d say the extra ice is needed. This Boodles Gin Tonica contains lemon peel, crushed juniper berries and a slit cardamon pod. I used Fevertree Tonic water, but in a much less exotic pour then I demonstrate here.

Lively with he citrus and herbal garnish accentuating those flavours of the gin. The slightly slit cardamom which are added gradually make their presence known as you drink.
Quite dry and sharp for gin and tonic with a touch of bitterness, partly die to the character of the gin but also the earthy quinine of Fevertree. You know you’re drinking a proper, adult drink with – not a trace of soda pop sweetness or fizziness.

Negroni
A Negroni that was rather smooth with an extra herbal element and some sweetness. The cardamom notes work very well and are followed by hints of rich, bitter chocolate. On the finish, the extra strength of the gin gives the experience of the gin a little more oomph. This was a sound drink and, whilst it’s not a textbook example of a Classic Negroni, it was a superb drink nonetheless and shows the extent to which a gin can twist the cocktail.

This cocktail has lots of flavour and some bite too. The gooseberry juice adds a tartness to the drink that balances out the sweetness of the grenadine and liqueur. The vermouth also add some sweetness but also some spiced charcteristics all of which are tied nicely together by the bitters.

The gin shines through with the extra ABV allowing the gin to hold it’s own in a relatively busy cocktail. the smooth crisp character of the gin as well as some of it’s more subtle spicy notes make the cocktail the drink it is.

If it’s not got Boodles in it, it’s not a true Kubla Khan.

In Conclusion
It was a treat to share with you my finer thoughts on my favourite gin. I’ve tried some really good gins that start to rival it – Finsbury Platinum and Gilpin’s Westmorland spring to mind – but, for now, Boodles still has the top-spot. If only it was a little easier to come by…

* I  recognise a few now, but I think that GinMC Aaron from TheGinIsIn and Modern Madam Geneva Sarah Mitchell of the Juniper Society have an edge on me.
** Amusingly, they also make my least favourite gin, Richmond.
*** Not through lack of trying; if you have any official sources, please let me know.
**** Still easily worth it, in my opinion.