This is the first part of my investigation into garnishes for Tanqueray Gin. I’ve spent a little time recently thinking about the lemon vs. lime argument. For World Gin Day, I made a Gin & Tonic according to a 1938 recipe using Mason’s Gin, which used lemon and/or lime (you had the choice). Having recently returned from Spain, I also fancied experimenting a little more with the Gin Tonica serve for this classic drink.

Naturally, after a quick reflection, I decided the best way to investigate this subject would be to do a taste test. I extended my normal citrus selection to include: lemon, lime, orange, pink grapefruit and red grapefruit.

I shall be tasting both of the following gins in my Gin & Tonics:

Tanqueray Export Strength (43.1%ABV) – from hereon referred to as “Original” – which is made using 4 botanicals: Juniper, Coriander, Angelica, and Liquorice; and

Tanqueray No:10 (47.3%ABV), whose botanicals include: Juniper, Angelica, Coriander, Chamomile, White Grapefruit, Lime and Orange (for the citrus, the whole fruit is used, not just the peel).

Each drink will be mixed with Fevertree Tonic. I will add a double measure of gin to a tonica glass filled with ice and then add 150ml of Fevertree Tonic. Each one will be garnished with a wedge of the fruit being tested and a little spritz of oil from the peel over the top of the drink, for aroma.

Original: A rather classic Gin & Tonic with dry, piney juniper, some angelica and sweet liquorice. Cooling and refreshing, this works very well straight-up without a garnish.

Ten: A crisp and clean Gin & Tonic, with lots of citrus notes and some sweetness, such as liquorice, coming through. A hint of floral notes, too. Even without a garnish, this also works very well.

Original: A good version of the drink, this is more floral than when using lime and provides a little more sweetness, too. It’s a very accessible and refreshing drink that makes you go back for seconds.

Ten: The slightly sweet notes of the lemon seem to muddle the more complex flavour of the Tanqueray No:10; it is still a quite acceptable drink, but I think that the lemon does the gin a disservice.

Original: Classic in style, this drink is dry, with a tiny hint of bitterness and a great citrus liveliness courtesy of the lime. A very classic serve and flavour, providing more bite to the drink than the lemon version.

Ten: Wow! A great example of how a garnish can add life and vitality to a drink. Lime is a great match for Tanqueray No:10. The drink on its own is good, but the lime really is the cherry on the cake and finishes the drink nicely. Easy to drink and rather morish.

Original: Works well with the two citrus fruits; the lemon adds sweet juiciness and the lime adds a crisp liveliness to the drink. Also, on the eye, the yellow and green are rather attractive. A good choice for Original Tanqueray.

Ten: Better than just lemon on its own: the lively lime works well with the gin but, alas, the lemon detracts too much and the flavour again becomes a bit muddied. Fans of strong juniper and coriander notes may like it, though, as these flavours seem to be amplified by the combination. 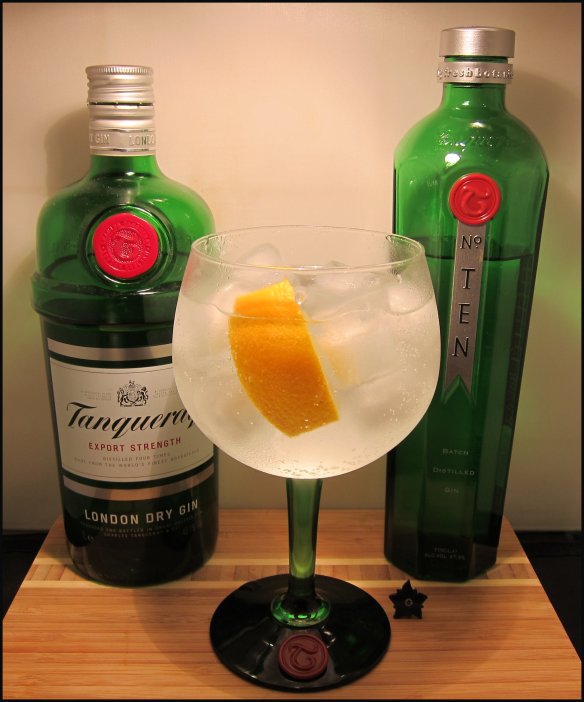 Original: Quite a soft Gin & Tonic. The orange is okay, but seems to clutter the underlying flavours of the gin somewhat and gives the drink a tannic quality.

Ten: Very fragrant and inviting, this serve highlights the gin’s juiciness. The orange works well with some of the lively bitterness from the pink grapefruit botanical, making this a much better match than with the Original Tanqueray.

Original: Just superb: you immediately get some citrus and floral notes from the garnish. The pink grapefruit adds a zesty succulence to the drink, but doesn’t overpower the gin, allowing Tanqueray’s underlying botanical character to come through strong. Simple, but effective, this is refreshing and definitely quaffable.

Ten: I thought that the Original Tanqueray went well with pink grapefruit, but I think that Tanqueray No:10 works even better. There is that same fresh, zesty, juicy citrus note coming through, but it’s accompanied by some more complex notes, such as a little bitterness akin to that of dark chocolate. This makes for a very sophisticated drink and one I could enjoy again and again. 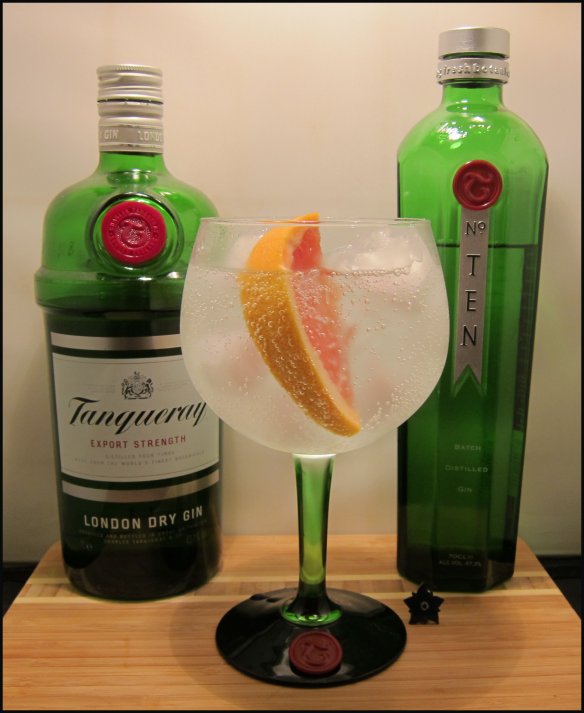 Original: The orange and pink of the garnish looks particularly attractive in the glass and provides an enticing aroma. It creates a very dry Gin & Tonic with a little zestiness at the end; a slight squeeze or muddle of the fruit invigorates the drink, making it juicier and more lively.

Ten: Simply excellent. There are some very rich, bold flavours here, but they work really well together: the fresh fruit is succulent and refreshing, with a little zesty bitterness right at the end. Some very faint hints of vanilla come through, too.

It is certainly true that the garnish really does impact upon the flavour and overall experience of the drink. Tanqueray No:10 seemed to pair particularly well with the citrus, more so than the Original Tanqueray, probably due to the citrus botanicals used in the gin.

I think that lime (the garnish suggested by Tanqueray themselves) worked well for both gins. Both pink and red grapefruit also worked well with both (unfortunately Waitrose didn’t have any white grapefruit, so I have yet to try that). Lemon seemed much stronger with the regular Tanqueray then the Tanqueray No:10, and I’d probably avoid orange all together, considering how good the other combinations were.

Tanqueray No:10 is available for around £28 for 70cl from The Whisky Exchange.

We’re big fans of comprehensive tastings, whether they be for Vermouth, Old Tom Gin, Ginger Beer or the ubiquitous Fruit Cups, so, given the recent increased interest in homemade ingredients (including garnishes), I thought that it was about time to try a range of cherry garnishes. I sourced around half a dozen varieties, ranging from standard to gourmet American cherries. 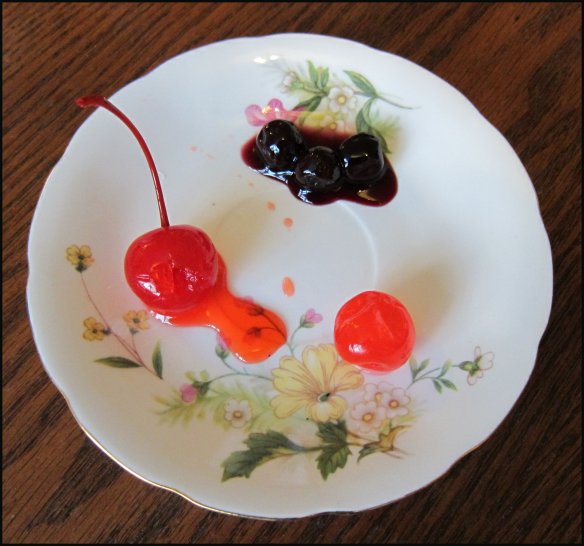 We’re big fans of comprehensive tastings, whether they be for Vermouth, Old Tom Gin, Ginger Beer or the ubiquitous Fruit Cups, so, given the recent increased interest in homemade ingredients (including garnishes), I thought that it was about time to try a range of cherry garnishes. I sourced around half a dozen varieties, ranging from standard to gourmet American cherries.

In addition to trying each of the cherries on their own, we also tried them in a Manhattan. 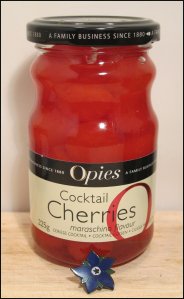 These are one of the most common varieties of cocktail cherries made by B-Opies who were founded in 1880. They also make cocktail cherries coloured: Green (creme de menthe), Blue (blue curacao), Orange (curacao) and other garnishes. Ingredients*

#2) Filthy Maraschino
Made by the American premium cocktail garnish company Filthy Food they are described as being “shockingly scarlet” and containing less than 1% of flavorings, coloring and preservatives.

Hailing from Italy, Visciole del Cardinale are sour cherries in a thick pure sugar syrup, that’s it as such there are no colouring or flavourings. These cherries are also used for Visciolata del Cardinale and Acquavite del Cardinale. We tried the unpitted although pitted (no stones) are now available.

Taster#1 (8) – Slightly sour, strong cherry flavour with a hint of cough syrup, very tasty.
Taster#2 (8) – Genuine flavour, not too sweet, really like the pop of the texture
Taster#3 (7) – Good flavour tasty but the stones are a bit annoying
Taster#4 (7) – Juicy and miles away from the first two – lovely

It is worth noting that these are probably designed to go in puddings (such as Black Forest Gateau) rather than cocktails but we thought we’d give them a go.

Taster#1 (4) – Too soft and soggy. The taste is not bad and it’s not too sweet.
Taster#2 (7) – The Kirsch goes well with the cherries. Flavour good texture soggy texture awful.
Taster#3 (7) – I really like these although the syrup is a bit strong.
Taster#4 (6) – Sogginess of the cherries really lets them down – good flavour. 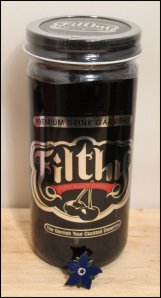 Made by the American premium cocktail garnish company Filthy Food they are made from Italian Amarena cherry, slow cooked in copper pots. They also make a fine array of other garnishes such as olives including some stuffed with blue cheese. Their flagship product is an olive stuffed with a mini pickle which looks quite interesting.

Taster#1 (7) – Glacé cherry texture, with a nice flavour, not too sweet, tangy finish
Taste #2 (7) – Good taste and texture with a nice pop when you bite into it
Taster#3 (7) – Seems very much like a genuine cherry – that’s good.
Taster#4 (7) – A step above your average cherry with a slightly dark bitter taste

From Luzardo the Italian firm who also make a famous Maraschino Liqueur. They are made from cherries candied with Marasca syrup (what their liqueur is made out of). The contents of jar is stated as being a 50/50 split between  Marasca cherries and syrup. No thickening agents or preservatives are used.

Taster#1 (7) – A gluey texture and a taste of fruitcake and dark raisins; quite nice.
Taster#2 (7) – Tastes like a combination of cherry and raisins.
Taster#3 (7) – Quite a dark flavour. but pleasant.
Taster#4 (8) – Really like these, great texture, great flavour, yum!

Luxardo Maraschino Cherries are available for £7.49 for 400g from The Whisky Exchange.

How did they do in a Manhattan?

#1) Opies Original
This has slightly acidic notes, but you quickly get used to them after a couple of sips. The garnish and the cocktail seem to have very separate flavours that never integrate properly, with the cherry being marzipan heavy and the Manhattan tasting very much like an ungarnished Manhattan.

#2) Filthy Maraschino
Quite dry, with distinctive notes of the whiskey that work well with the strong vanilla of the cherries. This is quite sweet, almost dessert-like, although there’s a slightly cloying flavour afterward.

#3) Visciole del Cardinale
These are a lovely colour and produce a pleasantly dry cocktail; I’d probably add a little extra syrup next time I try this. The cherry most definitely takes centre stage when you come to eat it, though (beyond the fact that the stones get in the way!), with a strong, natural flavour.

#4) Opies Black Cherries with Kirsch
Not very attractive to look at and it takes a little while for the cherry’s flavour to really come through. The cherry also quickly disintegrates in the mouth, with a somewhat slushy texture. Unfortunately, although I’m sure some would like the texture of these, the whiskey seems to clash a tad with the Kirsch.

#5) Filthy Black
Sticky and sweet. The syrup from the cherry sticks to your teeth, and the general flavour coats your entire mouth with an artificial sweetness that then turns a bit acidic.

#6) Luxardo Maraschino Black Cherries
Good – the cherry adds a little sweetness and a hint of treacle and fruitcake. It both looks rather sophisticated in the glass and adds a subtle, but interesting twist to the drink. In addition, the syrup is heavy and pools at the bottom of the glass, meaning that you get a delicious, sweet  treat at the end of your drink.