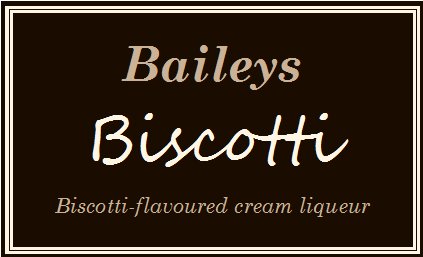 After the recent unveiling of Baileys Orange Truffle, I decided I should really write about Baileys Biscotti, which made its début in September of last year (2011). This is a blend of the Original Baileys cream liqueur with added flavour of biscotti biscuits: dry, double-baked biscuits made with almonds that originate from Italy. In the UK, I’ve only ever had them served with coffee, although Wikipedia tells me that they are also often served with either fortified or dessert wine, depending upon your location (and both of which I’d like to try).

Nose: Very sweet and a strong, distinctive note of layers of wafer filled with vanilla cream, which was so strong that I found it difficult to find anything else. A hint of coffee made its way in towards the end.

Taste: Velvety and viscous from the outset, but also rather sweet. The flavour, like the nose, reminded me more of vanilla wafers than biscotti, although there’s a dryness on the finish that reminds me of almonds. At the very start, there’s a hint of coffee and whiskey, but this is quickly washed away by an intense hit of sugar and then a long, lingering creaminess. 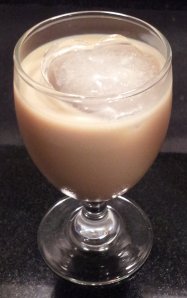 The nose was unchanged over ice, but the drink itself seemed even sweeter and less balanced, reminding me of a poorly-made cream cocktail.

With a dash of Poteen

To be more precise, I used an approximate 5:25 ratio of Poteen* to Baileys. I decided to try this, given how wonderful it was with Baileys Orange Truffle. In this drink, it added more of a kick and, although it reduced the cloying creaminess of the liqueur – very much a positive thing – and replaced some of those sweet vanilla notes with some spicier ones, the two sets of flavours just didn’t seem to pair as well. I’m saving my Poteen for superior combinations!

Without a doubt, this was where this liqueur was at its best. I used strong, bitter coffee, to help balance out the sweet and creamy aspects of the Baileys. The sugary, vanilla wafer note appeared briefly at the beginning of the drink, followed by the unmistakable flavour of coffee with cream. I’m sure this will still be too sweet for some, but then those people are unlikely to be looking for a cream liqueur to add to their coffee!

I was initially intrigued at the prospect of this flavour, but I have to admit that I was somewhat disappointed at how sweet and cloying it turned out to be. As such, the Orange Truffle remains my favourite version of Baileys, although the vanilla wafer notes of the Biscotti variety may occasionally find their way into a cup of my coffee.