Thomas Henry Tonic Water is just one of a range of mixers produced by this German firm that we shall be reviewing today.

I’ve long been interested in tonic water and, after a recent tot-up, I realised I have now tried over 50 different varieties; so you can imagine my intrigue when Simon Difford’s digital version of Class Magazine gave first place in their Tonic Water tasting to a product that I had never even heard of, let alone tried.

Needless to say, I quickly got on the phone to Germany to find out more about it. I spoke to Sebastian Brack, who told me that, in addition to the acclaimed tonic water, they also make Bitter Lemon, Ginger Ale, Ginger Beer and Soda Water; he was kind enough to send me samples of the first four of these.* 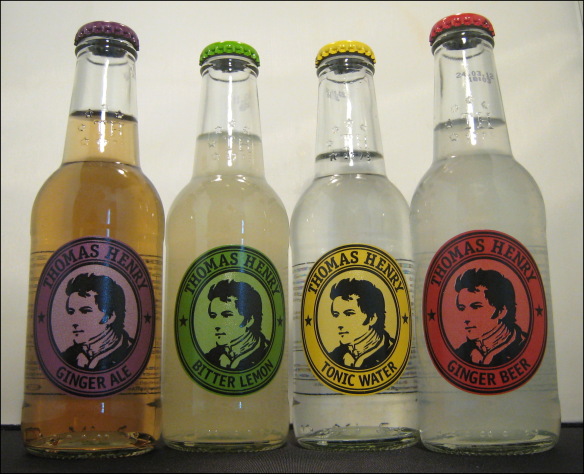 Thomas Henry was an apothecary from Manchester, England. He is attributed with the first production of carbonated water (the first fizzy drink/soda) in 1773; he made this  in 12-gallon barrels. The technology he used was based on the system by Joseph Priestly (who invented/discovered carbonated water in 1767). It wasn’t until 1794 that Jacob Schweppe started production of his sparkling water.

1) Own
Clean, crisp, fresh and light. This is not too heavy in terms of citrus and has a balanced sweetness. It has a high-to-medium level of fizz and a good depth of flavour, with some earthy bitterness and a touch of sweet citrus at the end.
2) Gin & Tonic
i) As always in my tonic water tastings, I used Plymouth Gin for this Gin & Tonic. The drink was excellent: the full flavour of the gin comes through, with added bitter and fresh characteristics from the tonic. It was clean and crisp, with a brilliant balance; exactly how a Gin & Tonic should be.
ii) For a second G&T, I used Knockeen Hills Elderflower Gin. Superb; I was surprised at how much of the flora and fruity elderflower notes from the gin were brought out by this tonic water. There was a touch of sugar at the end, but the cocktail is neither too sweet, nor cloying. This was a great way to enhance the gin and a very tasty Gin & Tonic.
3) Vodka
I used Beluga Vodka. With Thomas Henry Tonic, this made a pleasant drink, with the underlying vodka coming through. This drink seems quite clean and refreshing, and citrus notes are more prominent. Once again, the mixer complements the spirit, rather than overpowering it.

1) Own
Good levels of citrus, sweetness and bitterness. Medium fizz with a full, but not overpowering, flavour. There’s also a good tang at the end, as well as a crisp bitterness, rather than a nasty cloying effect.
2) With Xoriguer Gin
This is a traditional way to drink this Xoriguer Mahon Gin, from Menorca; the floral and herbaceous flavours of the gin are very strong and cooling, and the bitter lemon provides a crisp, citrus finish. This gin can also be used to make a great Gin & Tonic.
3) With Sloe Gin
I used the Marks & Spencer Sloe Gin (made by Boudier, In France) Delicious; a gentle way to lengthen your sloe gin in the summer. The bitter and tangy citrus contrasts nicely with the sweet, fruity and marzipan characteristics of the sloe gin.

1) Own
Thomas Henry’s Ginger Ale has a typical ginger ale nose, with ginger, citrus, and a hint of sugar, all of which are quite light. It has a medium-to-high fizz and quite light flavours, including subtle ginger. There’s good effervescence, although it’s a touch cloying. Still, it is a fresh and unobtrusive mixture that should work well with most spirits.
2) Gin Buck
Quite nice, with a ginger-nut biscuit fieriness. Flavours of the gin come through strongly and the drink is not too sickly, although in vast quantities it may become so.
3) Horses Neck
An unobtrusive mix: the ginger ale gives the brandy room to breathe and the flavours come through. For my taste, it’s a tad sweet and could do with some more fire, but it’s still rather good.

1) Own
A very familiar nose of a good standard ginger beer. Reminds me of my standard when using the soft drink, D&G’s Old Jamaica. A cool start, with medium-to-high fizz, musky ginger and then sweeter, with medium fire from the ginger. A very good mixer and comparable to Old Jamaica, but not better.
2) Moscow Mule
Works well; the ginger beer is not too intrusive, but does add something to the mix. The drink isn’t sickly or overpowering and is a good standard for the Moscow Mule, but not spectacular.
3) Dark ‘N Stormy
Pretty tasty. The ginger beer let’s the dark burnt sugar of the rum through, whilst adding the fresh combination of lime and ginger, as well as a fiery kick. Very tasty and above average, but not exceptional.

I think that it’s clear from my review that I am impressed with Thomas Henry mixers overall, the Ginger Beer and Ale being of a good standard and the Bitter Lemon being better than most of its competitors (it was the bitter-sweet balance that did it). But Thomas Henry’s Tonic Water was the real gem of the tasting; it is truly exceptional and possibly the best I have ever had (a blind run-off of my top 5 is in order, I think).
Overall, this is an excellent range. I hope that they find a UK distributor soon so that we can all get a chance to try and enjoy them.

The Thomas Henry Products are not available in the UK but if you are and importer/distributor and think it may be of interest please Contact Them Here.

.* Sebastian seemed a little bemused at how much e-mail interest he had been getting from the UK in the previous day; once I had explained about the article (and e-mailed him a link) it became much clearer.