Coming this week is 4th May or, in America, May 4th (as in “May the 4th Be With You”), which makes it Star Wars Day. As such, I am creating some companion cocktails for each of the seven films. Today, we’re watching/drinking to Episode II.

Episode II – Attack of the Clones

In which we see: the beginnings of the stormtrooper, a galactic colosseum, and possibly the worst on-screen chemistry of any cinematic couple. 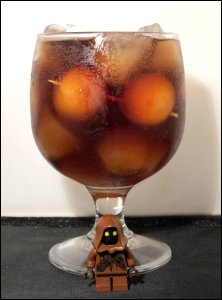 The Jawas – those rapscallions from the desert planet, Tatooine – appear in a number of the Star Wars films, but with so much inspiration for drinks in Episode IV, I’ve fitted them in here.

Smooth, slightly sweet and herbal cola flavours are lifted by lovely notes of black coffee, dark chocolate, and sweet vanilla wafers. On the finish, the light fruitiness of the honeydew comes through, nicely complemented by the other flavours and making the drink a refreshing cooler.

Kamino is the water planet from which the clone army originates. Unsurprisingly, given that its inspiration is a planet covered by sea water, this cocktail is blue and, sticking with the aquatic theme, it has a scoop of cream added to make it a “float”. *groan*

Recipe
25ml Vanilla Vodka, 15ml Blue Curacao, 100ml cream soda
Add the vodka and curacao to the glass, top up with cream soda and then add a dollop of vanilla ice cream.

The creamy vanilla of the cream soda is strong at the outset, then gradually fades to a zingy, refreshing note of sherbet-like citrus. Very tasty and the perfect colour to accompany the tranquil, then stormy scenes on Kamino.

Portrayed by the wonderful Sir Christopher Lee, Count Dooku is a character that I don’t think we get to see enough of. This drink has a slightly red colour – a nod to Dooku’s lightsaber – and the Italian vermouth is a reflection of Lee’s Italian heritage.

This is a complex, herbal, and bitter cocktail that would make a great aperitif. It starts with dry notes of cola, red currants, and cherry, with a gradually increasing herbal bitterness somewhat reminiscent of a Negroni. After a few sips, however, it takes on more of a creamy, bourbon character. The finish is of smooth vanilla oak, but it nonetheless keeps its refreshing, bitter edge.