This is the first in a new series of occasional articles entitled “Cocktails of the Rich & Famous”*, which will investigate products that were favoured by, invented for, or otherwise closely associated with some prominent character from the past. To kick off, I shall be featuring a drink favoured by Napoleon, Jane Austen and Charles Dickens.

In 1685, Simon van der Stel was granted a farm near the Cape Peninsula in South Africa by a Dutch East India official. Van de Stel named the farm Constantia (after the official’s granddaughter) and found the decomposed granite soil and shelter of the coastline valley productive for growing grape vines. 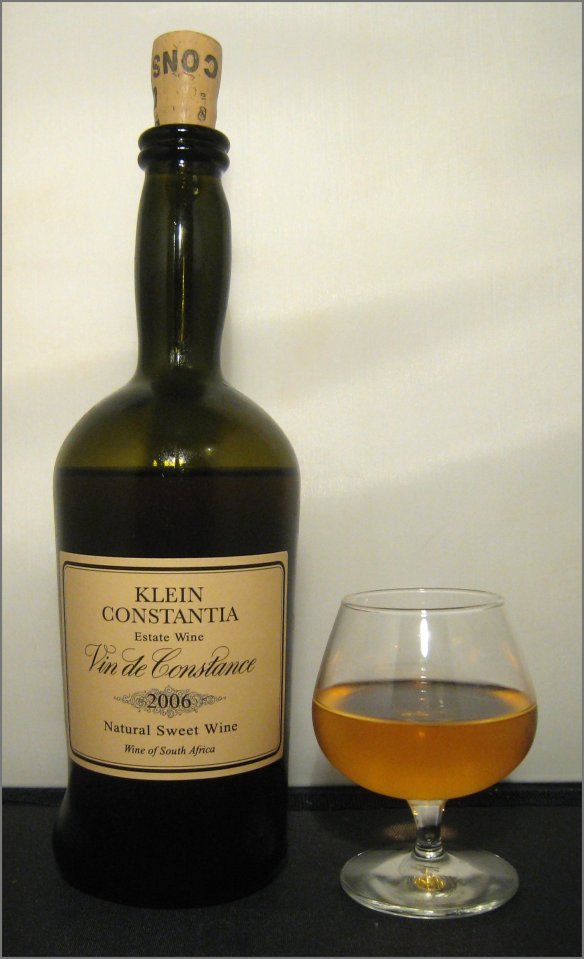 In 1776, Hendrik Cloate purchased the Constantia Estate and increased the winemaking. When Hendrik died in 1818, his son, Johen Gerhard Cloate, inherited Klein Constantia (the upper part of the farm) and, by this time, there were 33,000 vines there. The popularity of the sweet wine soared, with it was being enjoyed by the social elite and many of the crowned heads of Europe.

Phylloxera (the wine blight) struck Constantia in the late 1860s, signalling the beginning of its demise. Eventually, the estate was sold and, soon after, their acclaimed wines disappeared.

Then, in 1986, Klein Constantia saw the first vintage of a recreated sweet Constantia wine, now known as Vin de Constance. This project was initiated by new owner, Douggie Joost.

What about the fame?
As I  mentioned during the 19th century, Constantia was favoured by heads of Europe, such as Prussia’s Frederick the Great and Napoleon. Such a fan was the former emperor of the wine that, when he was exiled following his defeat at the Battle of Waterloo to St. Helena, he had some shipped in specially.

In Jane Austen’s ‘Sense & Sensibility’, Mrs Jennings reflects upon her husband’s fondness for the wine, claiming that it benefits his “colicky gout”. Elinor Dashwood is given some of “the finest old Constantia wine … that was ever tasted” (originally intended for her now sleeping sister) and reflects to herself of its “healing powers on a disappointed heart”.

On its own
Nose: Dry grape, followed by sweeter honey and spice notes, such as cinnamon and nutmeg. Very inviting.
Taste: The wine’s texture is smooth and silky and, in terms of taste, an initial dryness leads to some sweeter honey notes, followed by the flavours of fresh, succulent and juicy grapes. There is a plummy jamminess towards the end and a hint of copper on the finish. Lightly chilled, this a crisp and refreshing drink and very pleasant to savour.

I used a 4:1 Gin to Vin de Constance ratio. The wine adds a sweet, creamy note with a hint of spice, slightly reminiscent of homemade rice pudding. The finish is slightly herbal with some higher floral notes. The drink is like a cross between a dry and a sweet Martini.

This makes a rich and flavourful drink that has strong, warming Cognac on one side, the juicy and sweet Mandarine Napoleon sitting on the other, neatly bridged by the Vin de Constance. There are herbal elements, too, as well as a lot of sweet citrus. For a tart and extremely refreshing drink, add 10ml of lemon juice, to make an “Emperor’s Vacation”.

With the lemon and the honey notes from the wine, this is reminiscent of a hot toddy for the summer: long, cool and refreshing, but you can still appreciate the finer points of the wine. It’s also not too heavy, alcohol-wise, so perfect for a scorching afternoon.

A full and rich drink that’s full of flavour: there’s hints of anise, wormwood, basil, rosemary, a touch of mint, bitter orange peel, lemon, green apple, vanilla, orange blossom, honey and a spicy mead with cinnamon. Refreshing, but with so much depth of flavour; this is one of the best vermouth cocktails that I’ve ever had – simply sublime.

Initially dryer than a Lillet Vesper, with a flavour of milk & honey that then builds toward the end. Whilst not as crisp, it’s much more complex and – overall – rather a good drink. Very, very tasty.

*It was originally “drinks of the rich and famous”, but I preferred the sound of “cocktails”; I hope you will forgive the indulgence.