Those of you who have read my review on Death’s Door will know of my fondness for its US State of origin, Wisconsin. So, as you may imagine, I was delighted to find out that there is another gin that comes from Madison, Wisconsin, made by the same distiller that makes Death’s Door.

The gin in question is Yahara Bay, which is made by master distiller Nick Quint at the Yahara Bay Distillery in Madison, Wisconsin. The bottle, to anyone familiar with Madison, is striking: tall and bright, with the Capitol Building of the State of Wisconsin in the background.*

Yahara Bay Distillers also make a range of Vodka, Whiskies, Brandy and Liqueurs, as well as selling the fascinating “Age Your Own Whiskey Kit”.

But for now, let’s get back to the gin. Yahara Bay is made using a Carter-Head-style still, is based on a wheat/corn spirit mix and contains 5 botanicals:
Juniper
Coriander
Fennel**
Orange Zest
.
And, finally, Cucumber; but, unlike Hendrick’s, this is part of the botanical mix rather than an essence added at the end. As such, the cucumber flavour works with the rest of the gin in a different way to those where it is added afterwards.
. 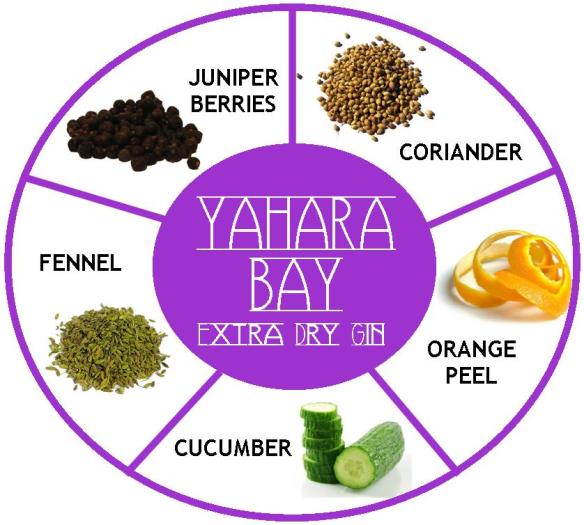 Own
Nose: Juniper and angelica; it’s also slightly salty, with a hint of cucumber and gherkin accompanied by a touch of brine.
Taste: Smooth. An initial sweetness is followed by dry juniper and a slight savoury sweetness from the cucumber on the finish. Very pleasant and a different, more savoury, sort of cucumber flavour than you get from Hendrick’s or Miller’s.Frozen
This was more viscous and floral than having the Gin at room temperature. Juniper and coriander came through, as do some of the savoury notes, including the cucumber; very good indeed.
.
Gin & Tonic
Coriander and orange initially, before fresh herbal notes from the cucumber. This a really fresh drink, which is slightly fruity. Packed with flavour, there were dry juniper, citrus and leafy characteristics, as well as a little vanilla towards the end and a superb, lasting finish. Top notch!
.
Martini
Superb. Whilst obviously being a Gin Martini, this is one with a twist. The primary flavours are of juniper and coriander, with some savoury notes of fennel and fresh, slightly salty, cucumber. Lovely stuff.
.
Negroni
Very tasty; soft, silky and savoury. There is a touch of sweetness just before the typical Negroni bitter finish, but not that much. This makes for quite a complex and rich cocktail, with the herbal notes of the Gin working well with the even deeper herbs of the Campari and Vermouth.
.

Alexander
Given how savoury this Gin is, I was surprised how well it worked in an Alexander; the resultant drink was pretty clean and not too sickly, with a hint of fennel and hot spice at the end. It works quite well.

Gimlet
Interesting combination, savoury and quite spicy. This finishes off with some tart lime. reminds me of Thai fishcakes.

Pink Gin
Quite a savoury and slightly bitter concoction, this was also rather bracing, but quite clean. A lot less sweet than many Pink Gins and, actually, the best I have had in a little while.

In Conclusion
Yahara Bay is another great example of the contemporary style*** of gins being made in the USA at the moment. I’m a big fan of Death’s Door and so it’s really good to see another excellent spirit come from the same distillery in Madison Wisconsin.

It was also nice to try a gin with distilled cucumber and see what that brings to the spirit in a different, but not necessarily better, way to the use of an essence in Hendrick’s or Martin Miller’s. And, of course, to finally try a gin that began with a “Y” has been a long time coming.

My favourite cocktails with Yahara Bay were the Martini, Gin & Tonic and Gimlet. If you get a chance to try this, I’d really recommend it.

* I toured this building during my time in Madison; rather spectacular!
** Those of you who are familiar with Death’s Door may realise that Death’s Door also contains the first three of these botanicals. Unlike Death’s Door, however, the fennel in Yahara Bay is much less dominant.
*** By “contemporary style”, I mean not in the Classic London Gin style, i.e. not dry and not heavy on the traditional botanicals of, not just juniper, but coriander/angelica/orris and citrus. Whilst those in the contemporary style are obviously still gins, with the juniper being present, they are also notably different.