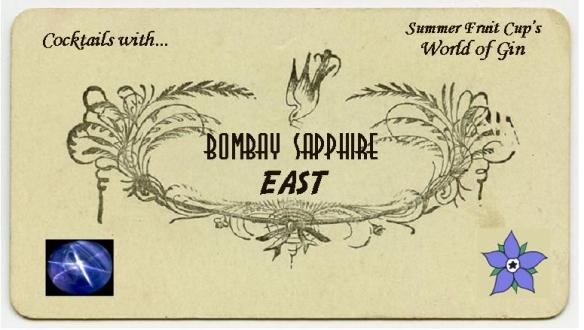 This article has been updated since I had a very informative trans-Atlantic conversation with Giles Woodyer, US Brand Manager for Bombay Sapphire.
When writing about Bombay Sapphire, it is tempting for a gin writer to become nostalgic and widely proclaim how it “single-handedly saved the gin world”. I’m not going to dispute its importance in the grand history of this juniper spirit, but today I want to talk about something new: Bombay Sapphire East.
.

It’s nearly 25 years since Bombay Sapphire was launched, turning scores of vodka drinkers onto gin and this is the first variation that the team at BS have created since then. This new creation is a bit tricky to get hold of at the moment, as it is currently only available in its test markets of New York and Las Vegas.*
Giles Woodyer told me that the idea of a new gin came from the recognition that in the last few decades the gin market has change substantially with more gins on the market and a wider appreciation of gin, they wanted to create something that would reflect the growing understanding of the gin consumer. In short, the time was right.
Initially Giles and a team of leading US chefs and bartenders sat down with a range of botanical flavours to see what would compliment Bombay Sapphire. Their aim was not to be too outlandish but simply to create a subtle but noticeable change. After much experimentation Black Peppercorn and Lemongrass became the flavours favoured by the panel.
But what about the name?
Bombay Sapphire pride themselves on sourcing the very best botanicals for their gins; they felt that the best lemongrass and black peppercorns came from countries in East Asia. Given Victorian interest and trade in the Far East it seemed to fit in nicely with the slightly colonial tone of the brand. The subtlety in the name change reflect that of the packaging and the spirit inside.
Regarding the difference with Bombay Sapphire, it’s a quiet change; Bombay Sapphire East is bottled at 42%ABV** and has the addition of lemongrass (Thailand) and black peppercorns (Vietnam) to the standard, ten botanical recipe. These themselves are relatively underwhelming botanicals, but I think that that actually says a lot about their approach to the spirit. Even the bottle is an understated reflection of the original (I happen to think it a very fine one at that), but, in the end, all this is irrelevant; what really matters is how it tastes.Before that, for the sake of completeness, here is a list of the botanicals in Bombay Sapphire East:
.

1) Own
On the nose, there are initial notes of grassy juniper and herbal citrus. There are also some salady notes, reminding me a little of a couscous salad or something similar. More juniper and a slight spicy note develops as time goes on; the pepper soon develops to the extent that you wonder how you missed it the first time round.
To taste, it is initially quite smooth, with some sweetness, but this gives way to a lightly creamy citrus and a little soapy coriander, before the black peppercorns appear on the finish. It’s pretty spicy and intense, but I like it.***

I was speaking to a gentleman from Bombay Sapphire at an event yesterday, who explained that there is a natural flavour progression between Bombay Dry, Sapphire and Sapphire East, with Bombay Sapphire sitting between the other two.

He also noted that one of their considerations when making Sapphire East was the fact that American Tonic Water is typically much sweeter than UK or European varieties and so the gin flavours were adjusted accordingly. The UK Bombay Sapphire tasting had some US Tonic Water sent over for their in-house briefing tasting team; as I sadly don’t have any, I’ve decided to try a range.

2) Gin & Tonic
i) with Britvic
As a Gin & Tonic, it still seems quite sweet, but there are some spicy notes that bring it back down slightly. It’s quite lemony, with a growing dryness at the end.

iii) with Fentimans
A little vanilla on the nose, I was sondering how the lmeongrass in the Bombay east with go with the lemongrass in the Fentimans. Sadly the mixer completely masks the gin, even at a 2:1 ration. Not a great combination.

3) Martini
It was Bombay Sapphire that initially switched me from vodka to gin martinis, so I’m keen to try this. I used Dolin in a 5:1 mix, which was stirred and served naked. ***
Pretty classic but perhaps a little more dry and savoury then many martinis. A slightly hot spiciness at the end. Really rather enjoyable.

4) Aviation
I was inspired to try this by an excellent Aviation I had last night, made with Bombay sapphire. Sadly the east version does not live up to it’s Big Sister. The spice and extra citrus seemed to take away from the potential accord**** of the drink and too me it seemed a bit too dry.

5) Negroni
I thought this was rather nice: it had a good balance of bitter sweet; starting with a spicy sweetness that gradually grows to a more herbaceous bitterness. The finish is a lingering combination of bitter and spice, although, overall, the flavour it is not too heavy as Negronis go.

6) GT Turbo
Top notch, the lemon grass in the gin works well with the herbal elements (including lemongrass) of John’s Premium tonic Syrup. Very fresh and pleasantly bitter. The quinine and the pepper spice seem to partner well together. Crisp and invigorating.
.
Final thoughts, I enjoyed trying this and I think it’s a good addition to the range. My favourite drink was the GT Turbo and my favourite Gin & tonic was with Schweppes. I like the fact that it retains the character of the original in the same way that the Beefeater Variations use the same standard 9 botanicals and just add 3 new ones to the mix (see here for a pretty diagram).
.
* In my ignorance I though Las Vegas an odd choice but Giles informed me that their is quite strong bar culture there but in the same way it is quite different to New York and so the two different test markets featured a cross-section of drinkers.
** In the UK, Bombay Sapphire is bottled at 40%ABV and in the US it is bottled at 47%ABV. Giles Woodyer told me that the reason for this was that after trying Bombay Sapphire East at various strengths this was the sweet spot.
*** I found that, as time went on, the peppery spiciness of the gin became more and more pronounced.
**** Accord basically means that the combination of the ingredients in a cocktail is greater than the sum of their parts.