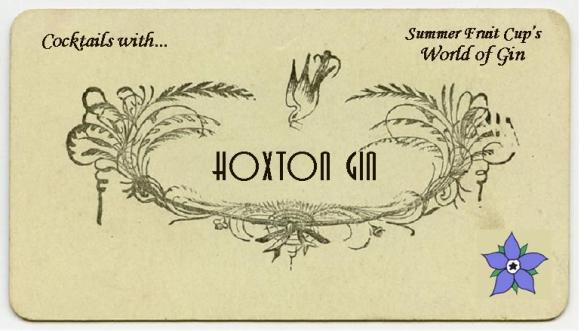 The world of Gin is a happy one and, in my experience at least, Gin Fellows are pleasant and cordial to each other and don’t engage in too much, if any, back-biting. As such, real controversies are generally few and far between, but occasionally something comes along that rattles the cages of the Gin Establishment, and the most recent “something” in this category was Hoxton Gin.

I first tried this in Gerry’s in Old Compton Street with Mr. Hartley. We were both taken aback and surprised that the liquid in our glass was a gin. However, I was also intrigued and, when I’m intrigued, that leads to experimentation. Therefore, I procured a bottle of the gin in order to try it out in a few classic cocktails in an attempt to get my head around the spirit and what its modus operandi was.

Hoxton Gin was created by bartender Gerry Calabrese, owner of the Hoxton Pony. He tells of his inspiration on their website:

“[Gerry] had the idea of recreating a classic; to create a fun Gin that’s like no other on the market. One that’s smooth, easy and different from the rest. “
The notable difference between Hoxton and other gins is the mix of juniper and other exotic botanicals: coconut, tarragon, iris, ginger and grapefruit. The botanicals are macerated before a single distillation in a copper pot still. The result is then blended with grain spirit, cut with water down to 43%ABV, filtered, and finally left to stand for 2 months.

My tasting notes are below, followed by a round up and final thought.

Own
Hoxton has a distinctive nose of sherbet and coconut ice cream, with a bit of citrus.
The flavour is quite fresh and zinging, with citrus as well as touch of bitterness, and coconut on the medium-long finish. The texture is initially rather smooth, but there is a slight burn/fizz at the end.

Frozen
Given the exotic flavours of the gin and a slight vodka similarity, I wondered how it would fare being drunk straight form the freezer.* The gin is slightly viscous and, curiously, seems a little fizzy. Juniper and bitter citrus come first, followed by some coconut, although this last flavour is quite subdued. There’s a fruity finish.

Gin & Tonic
There is strong nose of fruit and coconut. The initial creamy coconut taste is followed by some bitter grapefruit and juniper, and then some quinine and a herbal hint. The coconut then returns on the finish. This is a drink full of fresh flavours and is quite refreshing. I thought that the middle notes were in line with a classic G&T, although the drink was generally outside of the usual Gin & Tonic flavour profile.

Martini
Zingy, with quite a lot of citrus, some coconut, followed by more pronounced floral notes. Juniper is present, but subtle and, overall, the drink is quite complex and rather dry. A very long finish.

Gimlet
Light and cloudy in appearance. My initial impressions were rather good: juniper, fresh and tangy citrus, with the coconut coming through at the end. Not as crisp as most Gimlets, but it is very smooth and rather pleasant to drink.

Gin Bump
I didn’t like this drink very much, as the bittersweet aspects clash and the flavours are far too harsh.

Negroni
There’s a good level of bitterness in this drink; it’s also herbally intense and has a long, dry finish. The coconut pops up at the beginning, which works well alongside the initial sweetness that you get from Campari. After your first sip, though, this fades away and, for the rest of the drink, it just provides a creamy layer to the drink, which I quite liked. Not a typical Negroni by any standards, but an interesting twist on one.

Although on closer inspection there is some depth to the Hoxton flavour, it is hard to escape the coconut in Hoxton and, if you don’t like this flavour (as Mrs. B doesn’t), Hoxton might not be for you. However, if you don’t mind it, you will find that Hoxton adds a sweet creamy note to many drinks, which works well in some cocktails.

My favourite drinks were the Gimlet & Negroni.

* This could, arguably, be described as a Naked Martini (served using the Diamond or Poured Method).

.
.
I’ve put my commentary in a separate section, as I’m sure some folks will be interested in it, whereas others may care solely about the taste of the product.Hoxton Gin is not of a traditional London Dry Gin style, with heavy juniper, citrus and a bit of earthiness, but, in its defence, it doesn’t say that it is, either. I thought that it made some nice drinks and, in many of these, the coconut is no more dominant here than the fennel is in Death’s Door or the Turkish Delight (Rose) is in Nolet’s Silver.

The debate about how much innovation is allowed is a pretty subjective. I think the balance of innovation in Bloom and Berkley Square (four traditional gin botanicals, plus a few more unusual ones) is a good one, however I know that some others disagree and think that even they are too far removed from tradition.

Final Thoughts
I don’t think that Hoxton’s departure from the classic style is anything new; there are at least half a dozen other gins that fall into a similar category. What Hoxton have done is to deliberately court controversy as a part of their marketing campaign and, as such, it is a spirit that most gin fans in the UK have heard of and many have tried; in terms of brand recognition, it’s a smart move.